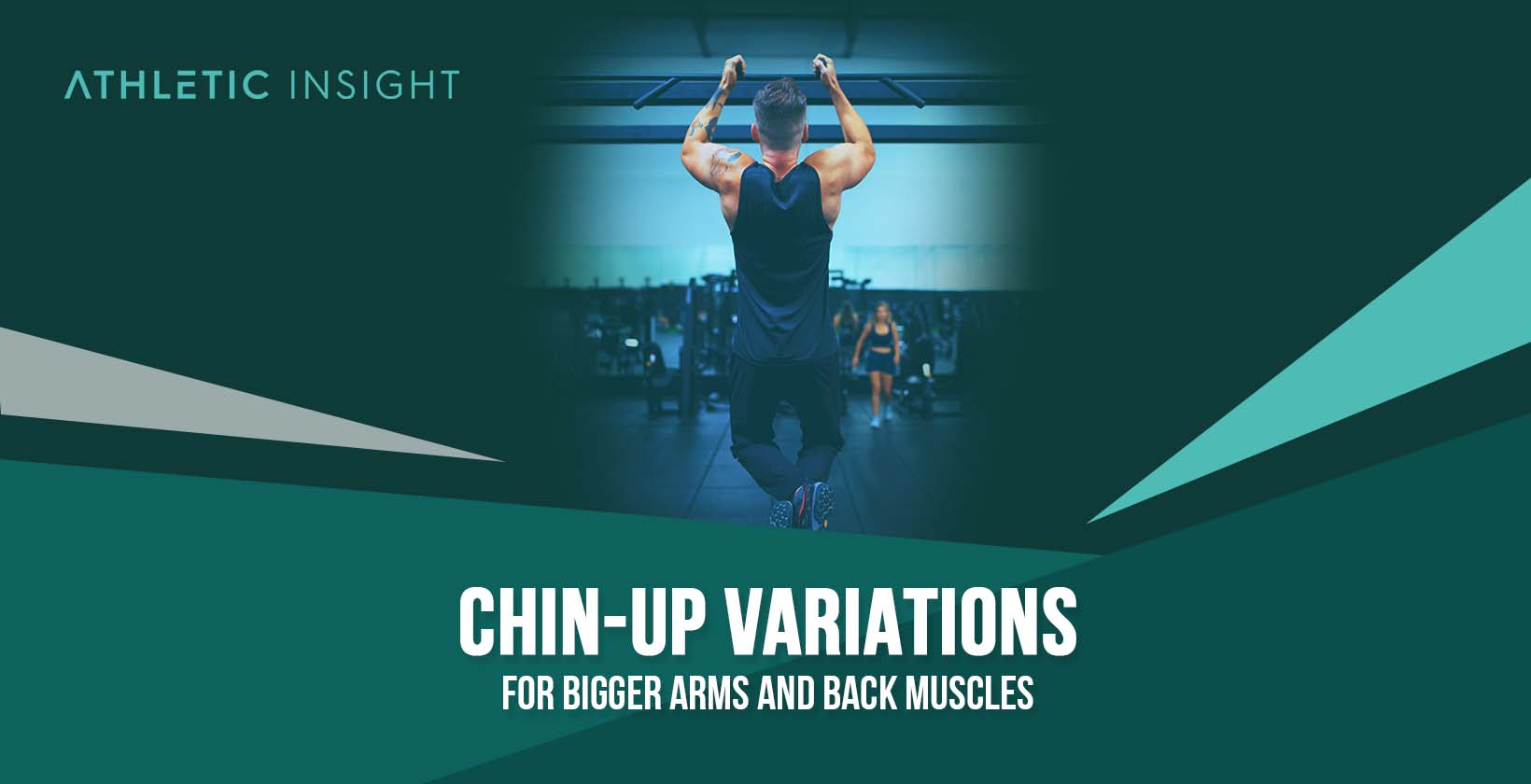 The chin-up has been a mainstay of strength training for decades. It is one of the most efficient ways to build upper body strength. It requires no gym membership or fancy equipment, and almost anyone can do it.

A chin-up is a bodyweight exercise focusing on upper body strength. It is done by hanging from a bar and pulling the body up to parallel the chin with the bar.

Several varieties exist that focus on particular muscle groups. Common variations of pull-ups and chin-ups include the neutral chin-up, eccentric chin-up, trap bar chin-up variation, and assisted chin-up. There is a chin-up weight variation called the weighted chin-up, and you can add weights to several of the regular variations, like the kettlebell chin-up variation.

These are the most effective chin-up variations for building bigger arm and back muscles.

The neutral/hammer-grip chin-up is a chin-up variation that focuses on the upper back muscles, including the latissimus dorsi, trapezius, rhomboid, teres major, and deltoids. They also work the bicep and elbow flexor muscles.

A neutral-grip or hammer-grip uses a semi-supinated grip, where the palms face each other. Many athletes find that a neutral grip is least stressful on the wrists. This makes the hammer-grip an excellent choice for athletes with joint pain, those just beginning a training regimen, or less experienced bodybuilders and athletes.

A common mistake while doing the hammer-grip is putting too much pressure on the arm muscles.

When using a semi-pronated grip, it is essential to remember to engage the shoulder (trapezius) muscles from the beginning. If the shoulder muscles aren’t engaged, other muscle groups will become over-taxed, and you won’t maximize the movement’s potential.

Likewise, for maximum benefit, be sure to begin the pull from a dead hang and keep your arms and wrists in line with your grip to eliminate awkward strains or uneven movement, which can cause injury. Keeping the core muscles engaged will help with stability and proper form.

Hammer-grip chin-ups are an easy to moderate variation.

The eccentric chin-up variation is a chin-up variation that concentrates on the arm (bicep, tricep, elbow flexor) and chest (pectoral) muscle groups. Shoulder and back muscles (latissimus dorsi, trapezius, and rhomboid) also get some benefit.

The negative chin-up, also known as an eccentric chin-up, is a variation best suited for beginners or anyone with low upper body strength. This exercise variation is essentially a half chin-up, starting from the fully raised position and then lowering down slowly.

When doing this chin-up variation, people’s most common mistake is to lower themselves too quickly.

The weighted chin-up variation can add an extra challenge for those wanting to step up their game. As the name implies, this chin-up uses added weight to increase the difficulty of the exercise. It’s great for bodybuilders and strongmen/strongwomen.

This exercise will work for all the classic chin-up muscle groups with added difficulty. Variations involve different methods of adding weight.

Keeping core tension is vital to doing this chin-up variation successfully, and failing to do so is the most common mistake people make.

While performing this exercise, be careful to start with a smaller weight and then build up over time. Don’t perform this exercise as a beginner.

Weighted chin-ups are an advanced technique, best for experienced bodybuilders, strongman athletes, or those with experience in the weight room.

Assisted chin-ups still use the same muscle groups (back, shoulders, arms) as other chin-up variations and can be done using several different methods.

Assisted chin-ups are a great way to get some reps in for those with limited mobility or an injury. It is also an excellent chin-up variation for men or women who need to balance out their strength in relation to their body weight.

Resistance bands looped with one end over the chin-up bar and the other end around the foot gives a gradually diminishing aid to the upward pull.

Many gyms have assisted chin-up machines that use counterbalances to offset the participant’s body weight, thus reducing the overall strain.

People’s most common mistake with assisted chin-ups is using too much assistance, rendering the exercise a moot endeavor. You still want to have a challenging workout. It’s also essential to complete the chin-up with proper form to avoid injury and get the most out of each rep.

Assisted chin-ups are an easy and low-impact variation, ideal for those just starting out and those with injuries or mobility issues.

The band resisted chin-up exercise variation is a chin-up variation that targets the latissimus dorsi and also works the trapezius and bicep muscles.

Pull-up chin-up variations for this exercise include the following.

The most common mistake athletes make during this exercise is loose form.

Keeping a tensed body is essential, primarily through the core, as with the weighted chin-up. Many people neglect this and end up with uneven balance and unsteady execution, often leading to injury.

This exercise is an advanced variation due to the increased resistance and the extra balance needed to pull it off successfully. This chin-up variation is best suited for more advanced athletes and those looking to advance their workout goals.

The towel chin-up is done by draping a towel over the chin-up bar and using it for a narrow grip. It is a good variation for experienced bodybuilders and strongman competitors looking to work muscles outside the usual chin-up groups.

An alternative to the towel chin-up variation is to use two towels with either a regular or wide grip. The wider the grip, the more you will use the hand, wrist, and forearm muscles.

Swinging to gain momentum is a standard error with this variation. Make sure to keep the body tensed and static. When doing towel chin-ups, keep a firm grip on the towel(s) to avoid slipping, and maintain a tight core to keep from swaying back and forth or side to side.

Towel chin-ups are an advanced technique. Bodybuilders and experienced athletes can perform this exercise.

Jumping chin-ups can add a bit of cardio to your anaerobic routine. This chin-up variation involves bending the knee 45 degrees, then swinging the arms forward and jumping, grabbing the bar with palms facing toward you, and then executing a standard chin-up before dropping back to the ground.

This chin-up variation is suitable for men or women who want to blend in some cardio work with their chin-ups or need a little extra assistance with the upward pull of the chin-up motion.

A common mistake while performing the jumping chin-up is bending the knees too much. Be careful with your form and have the proper grip on the bar.

An advanced modification on the Jumping chin-up is jumping with alternating legs, which will increase the work to the leg muscles. Another more moderate variation is to jump into a hammer grip chin-up to give a little extra work to the arms.

This is an intermediate to advanced chin-up variation.

The single-arm chin-up variation is a variation of the regular chin-up that targets the biceps and tricep muscles in the arm.

Easily one of the most challenging chin-up variations for biceps, the single-arm chin-up requires a great deal of strength and balance to achieve correctly.

Modifications include an oblique twist at the top, which will work the oblique and abdominal muscles or jumping single-arm chin-ups, which activate many of the leg muscles and offers some marginal cardio work.

Swaying and wavering is the most common mistake with this variation. It is essential to keep the body still to avoid injury.

Single-arm chin-ups are among the most advanced variants. They should only be attempted by those who are experienced and have abundant upper body strength and control.

What to Know About Chin-Up Variations

Chin-up grip variations are significant for targeting the arm and shoulder muscles during your workout routine. Here are some facts you should know about chin-ups.

It’s beneficial to find a chin-up variation that works in your regular routine if you’re looking for long-term results from your chin-up alternative exercises.

Which Type of Chin-up Is Beginner-Friendly?

The assisted chin-up is a variation that is good for beginners looking to target the shoulder, back, and arm muscles at once.

This chin-up variation is suitable for both men and women of any age. Choose this variation when you’re looking for a more beginner exercise than the original chin-up exercise.

A common mistake during this exercise is not letting your body do the work. Don’t put too much of your exercise into the bar or support. Try combining this exercise with another from this list as a buffer for when you get tired of a more advanced workout.

Which Type of Chin-Up Is Good for Weightlifters?

The weighted chin-up is a good chin-up variation for weightlifters looking to build arm and shoulder muscles. It is best suited to men, but both genders can practice it.

A common mistake during the weighted chin-up is using too much or too little weight. Build up the weight resistance by starting small.

Use the weighted chin-up with a dumbbell or kettlebell. It is best for advanced athletes looking to practice weightlifting during their chin-up routine.

What Are the Alternatives of Chin-Up Exercises

The chin-up exercise and alternatives include the following.