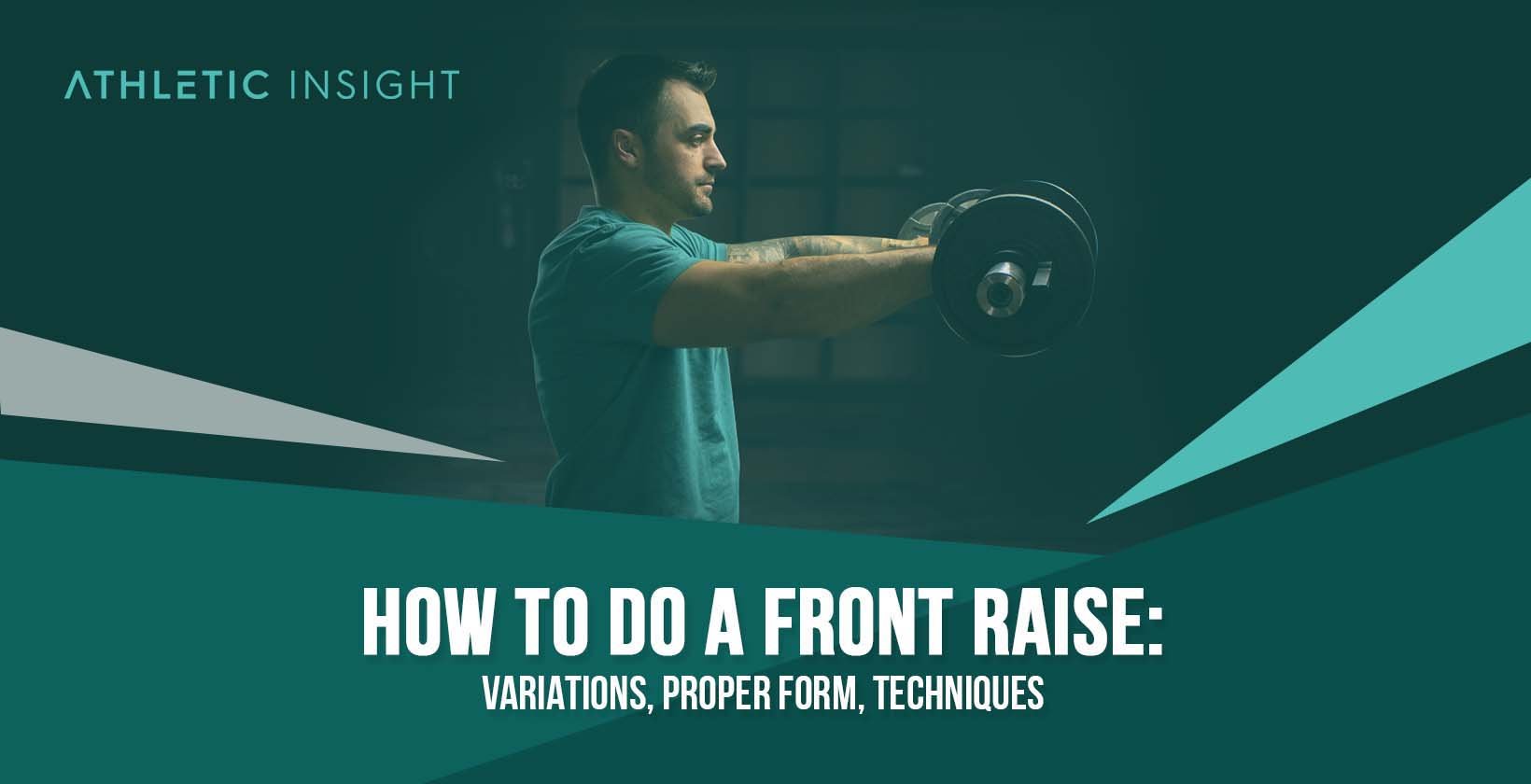 The front raise is a weight training isolation exercise that isolates your shoulder flexion and targets the anterior deltoid. While the deltoids are the primary focus, this exercise also works out the serratus anterior, biceps brachii, and clavicular portions of the pectoralis major (pecs).

While the front raise is an effective exercise when it comes to strength training, it also poses a few risks if you do not perform the lift properly. The primary risk is that you may experience muscle strains and tears. If surrounding muscles can not support the lift, you may damage surrounding muscles as well.

Aside from using too much weight, the aforementioned risks typically appear through improper lifting techniques. For that reason, it is important to ensure that you are not swinging the weights, shrugging the shoulders, and standing with improper form. In order to master the front raise and gain the much desired mirror muscles you are looking for, it starts with good grip strength and perfect form.

How to Perform Front Raise with Proper Form?

The Front Raise is an effective exercise and one of the best shoulder workouts to include in a routine. To achieve the ideal front raise techniques, stand shoulder-width apart in a comfortable and neutral neck and spine position.

Hold even-weighted dumbbells in front of the thighs, holding them overhand with the palms facing the body; engage the core throughout the exercise; move the arms forward and away from the body. Pause once the elbows are in line with the shoulders, and then in a slow and controlled motion, bring the dumbbells back down toward the thighs without touching them.

What are the Benefits of Front Raise?

The front raise is a great compound lift for anyone that wants shoulder definition and is often a crucial part of people’s arm-focused workouts.

While bulky, defined shoulder muscles are wonderful for aesthetics, they are also quite handy in day-to-day life. Straining to lift something too heavy can result in injuries like a pulled shoulder muscle or even a hernia.

One may not think about using the chest muscles often, but they attach to the ribs and have more to do with breathing and posture than many know. Toned chest muscles can improve posture while strengthening and lengthening chest muscles.

Flexion, which refers to the rotation of the joints, improves with front raises. The steady and controlled movement keeps the shoulder muscles primed for flexion, ready to reach or lift something.

4. Builds Strength and Definition In the Front and Sides of the Shoulders

While the bicep, deltoid, and pectoral muscles handle the brunt of this movement, there are many other small muscles along with the biceps that work in synergy to achieve the exercise.

What are the Mistakes for Front Raise Form?

The front raise is a straightforward exercise, but to spare one from injury or wasted time, avoid these bad habits so one can maximize the workout and avoid injury or strain.

How to Determine Proper Weight for Front Raise?

The proper weight for a front raise can be determined by body weight, gender, and workout experience. Beginners should stay under 10 pounds and slowly work their way up. The average weight for a female to front raise is 22 pounds, and the average for a male is 40 pounds.

If it is still unclear what weight to start with, a safe beginning weight is usually about 0.1% of the body weight.

Which Muscles are Involved While Performing Front Raise?

The muscles involved in a front raise include the upper pectoralis, anterior and lateral deltoids, biceps, pectoralis minor, levator scapulae, serratus anterior, and upper and lower portions of the trapezius.

What are the Front Raise Variations?

A front raise variation is when one starts with the arms in a relaxed state with weights, and then raises the arms out in front of one. Variations can feature different grips or positions to enhance the workout or make it easier.

What is the Necessary Equipment for Front Raise?

Below is all the possible equipment one could need for a conventional best front raise or any front raise variations.

For the standard front raise technique, all one needs is two dumbbells and a stable surface to exercise on. The front raise variations can require extra equipment.

What is the Origin of Front Raise?

The origins of the front raise are unknown. An exercise like this has been part of workout routines for a long time, and it is difficult to trace its beginning.

What are the Front Raise-Related Facts?

Here are some useful facts about front raises:

Does a Front Raise Affect the Hormones?

Exercising the muscles with weights also produces testosterone because it promotes muscle growth.

Does Front Raise Affect the Aesthetic of the Body?

Yes, the front raise affects the aesthetics of the body because of the focus on delts, biceps, and pectorals, the front raises bulk the front and sides of the arms and especially the shoulders; the pectorals also become more defined. Front raises are great for seeing results because they work the mirror muscles the most.

Is Front Raise a Military Movement?

Yes, front raises are an essential part of an arm and shoulder workout. A master front raise can do wonders to the arm and chest muscles.

Is Front Raise an Olympic Movement?

No, front raises are not a weight lifting category in the Olympics.

Is Front Raise a Compound Exercise?