How to Do a Chin-Up: Variations, Proper Form, Techniques 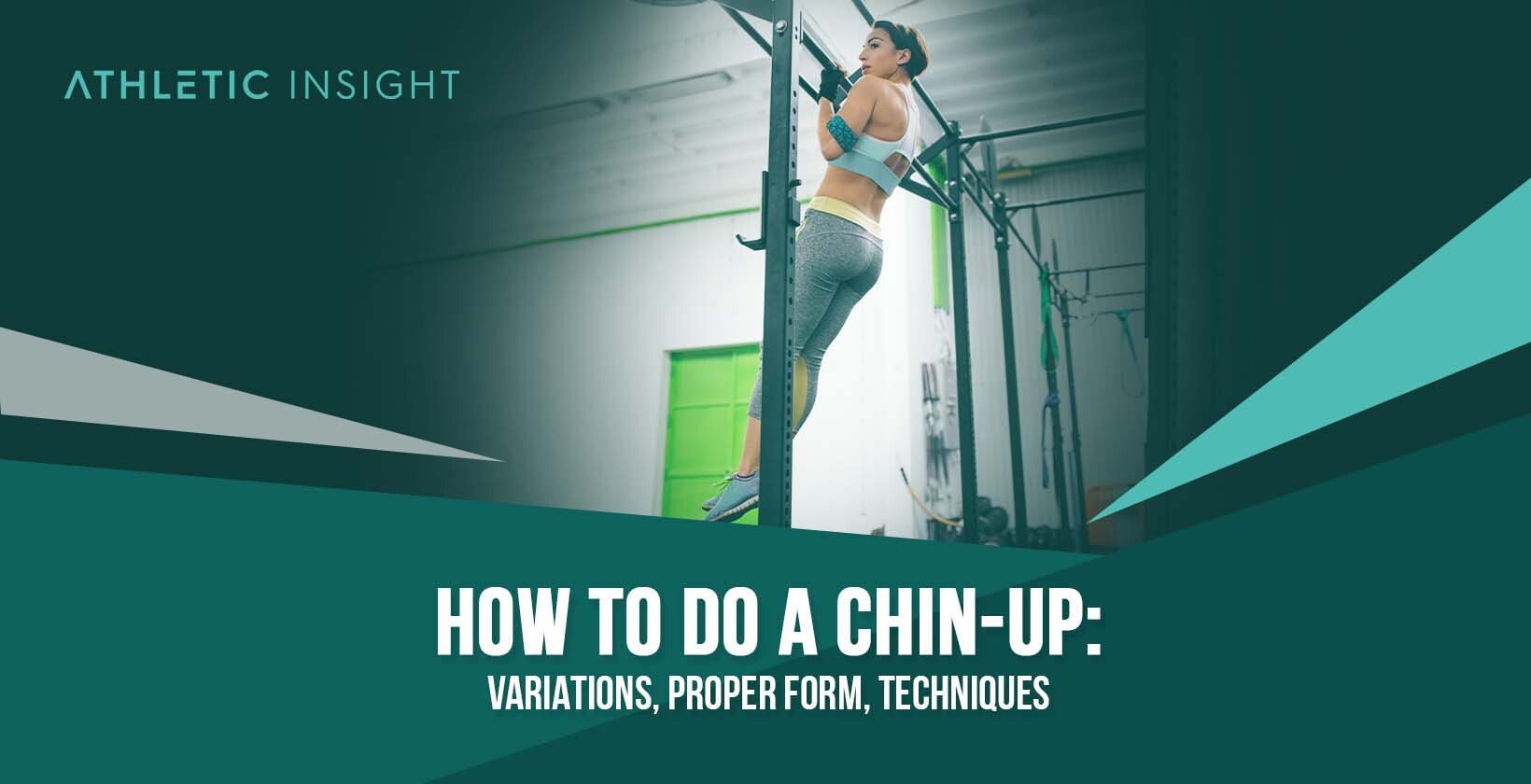 Chin-ups are an effective bodyweight exercise that targets the biceps brachii, brachialis, latissimus dorsi, teres major, posterior deltoid, and the overall core. In addition to increasing strength and muscle size, the chin-up aids in improving grip strength as well.

However, without proper form, athletes can risk injury. Therefore, correctly performing this exercise is essential for maximum benefits. To perform this movement, you need to grip the bar with your arms shoulder-width apart. Then, with your palms facing inwards, pull your body up until your chin reaches the bar.

Although the chin-up is a simple movement to learn, beginners may make common mistakes that could hinder their performance. A few of those mistakes are not using a full range of motion, not engaging the core muscles, using momentum rather than isolating the muscles, and not engaging the shoulder muscles.

When an individual does not use proper chin-up techniques, there is always a risk of injury. Because the arms are the primary driving force for this movement, some common injuries can affect the shoulders, biceps, elbows, and neck.

To master a chin-up, an athlete should be moving through the action slowly and deliberately while engaging the shoulders the entire time. Individuals will reap the full benefits when they complete this exercise with a full range of motion from the bottom up to the top.

How to Perform a Chin-Up with Proper Form

Proper form is essential when completing any exercise, including chin-ups. Engaging the shoulder muscles throughout the entire movement is critical, and athletes should not hang loosely at the bottom of the action.

To dominate a chin-up and get the most benefits, keep the shoulder blades back at all times and move through these steps. The Chin-up is an effective exercise and one of the best back workouts to include in a routine.

1. Grip the bar with the palms facing toward the body

Grip the bar with the palms facing toward the body. The chin-up grip is easier to hold than that of the pull-up grip since you are activating the biceps muscles more. When doing chin-ups, the harder you squeeze the bar, the easier the repetition.

2. Extend your arms as much as possible

Extend your arms as much as possible to avoid cheating yourself out of a complete repetition. If you do not start from the bottom, especially after each rep, you are at risk of shortening the range of motion in your muscles.

3. Maintain a neutral spine and a strong core throughout while keeping your neck aligned

Maintain a neutral spine and a strong core throughout while keeping your neck aligned. While the goal is to bring the bar to your chest, keeping a neutral spin will help to prevent injuries. It will also aid in completing the rep as your body is pulling evenly if you are in a neutral position.

4. Pause briefly at the top of the movement and gently move back to the starting position

What Are the Benefits of a Chin-Up?

Chin-ups may be one of the most overlooked strength exercises at the gym today. However, anyone who wants to build on their routine and target the biceps and upper back should incorporate this movement regularly.

Athletes who perform this movement will see these benefits of chin-ups quickly.

What Are the Mistakes for Chin-Up Form?

When athletes do not use good chin-up form, not only do they not get the full benefits of the exercise, but they risk serious injury. Following are some chin-ups mistakes.

How to Determine Proper Weight for a Chin-Up?

Athletes new to the chin-up exercise will have to work towards their full body weight. However, several alternatives help determine the proper weight for a chin-up as you build strength and endurance.

Various equipment, including exercise bands or a chin-up assistance machine, target the same chin-up muscles worked as doing the movement with bodyweight. Beginners can start with 50% of their body weight as assistance and slowly lower the aid until they can complete the activity independently.

Which Muscles Are Involved While Performing a Chin-Up?

For anyone asking, what do chin-ups work, this movement isolates specific auxiliary muscles to help build overall strength and endurance. Naturally, they work the arm muscles, but it is more complex than that.

The arm muscles are activated when an individual pulls up to the top of the movement and slowly descends to the starting position.

Upper and Lower Back Muscles

With proper form, the upper back muscles will be continuously active to support the shoulders and lower body during the movement. In addition, the thoracolumbar fascia is a stabilizer in the lower back that helps maintain spinal alignment during the exercise.

Keeping a tight core will prevent injury, activating these muscles to keep the spine in a neutral alignment.

What Are the Chin-Up Challenges?

Chin-up challenges are ways to mix up a workout routine and push athletes to their limits for jumpstarting strength and endurance.

What Are the Chin-Up Variations?

The variations of chin-up can provide alternative benefits to the chin-up muscle group and help the body from becoming accustomed to the same movement.

What Are the Necessary Equipment for a Chin-Up?

Chin-ups target muscles that are useful in other exercise movements. All you need to perform a best chin-up barbells is a pull-up bar. Some individuals may require a bench or box to stand on and an exercise band for assistance during the movement.

Which Muscles Can Be Affected More From a Chin-Up?

Of course, the arms and shoulder muscles are more affected when performing a chin-up than in other exercises. Therefore, this movement helps isolate these muscles effectively without using large supportive muscle groups.

What Are the Back Muscle Exercises with a Chin-Up?

Individuals can incorporate best chin-ups for back exercises by alternating hand placement. An example of a well-rounded routine is included below.

What Are the Chin-Up Related Facts?

It is believed that Johann Bernhard Basedow helped perfect the chin-up and pull-up movements back in the late 1770s. He was a well-known gymnast in Prussia and brought more attention to today’s chin-up muscles exercises we do now.

Is a Chin-Up Practiced Within CrossFit?

No, the chin-up is typically not practiced within CrossFit competitions, but many athletes will perform them as part of their training exercises. In addition, the muscles used in a chin-up will benefit other movements, such as the pull-up and deadlifts.

Is Chin-Up a Military Movement?

Yes, the chin-up is a military exercises that focuses on strength and endurance training. So what are chin-ups good for, and how can they help? Naturally, the muscles worked will support a strong upper back, shoulders, and arms for lifting weight.

Is a Chin-Up Dangerous?

Naturally, any exercise not done correctly can be dangerous and prone to injury. For example, do chin-ups work back muscles? Yes, they engage some upper back muscles, but the chin-up is a highly safe movement to perform on average.

Is a Chin-Up Push or Pull?

Supinated chin-ups are a pull exercise as the individual pulls the body upward to the starting position. Rather than pushing the body away from the bar, athletes pull toward it.

Is a Chin-Up an Olympic Lift?

No, the chin-up is not an Olympic lift, but it helps build muscle strength and endurance that will benefit Olympic lift movements. Additionally, by performing supinated chin-ups with palms facing in, athletes can isolate these smaller supporting muscles to use with alternative exercise movements.

Is a Chin-Up a Compound Exercise?

No, the chin-up is not a compound exercise. Instead, it is classified as an auxiliary movement that isolates specific supporting muscles, including the biceps and posterior deltoids.