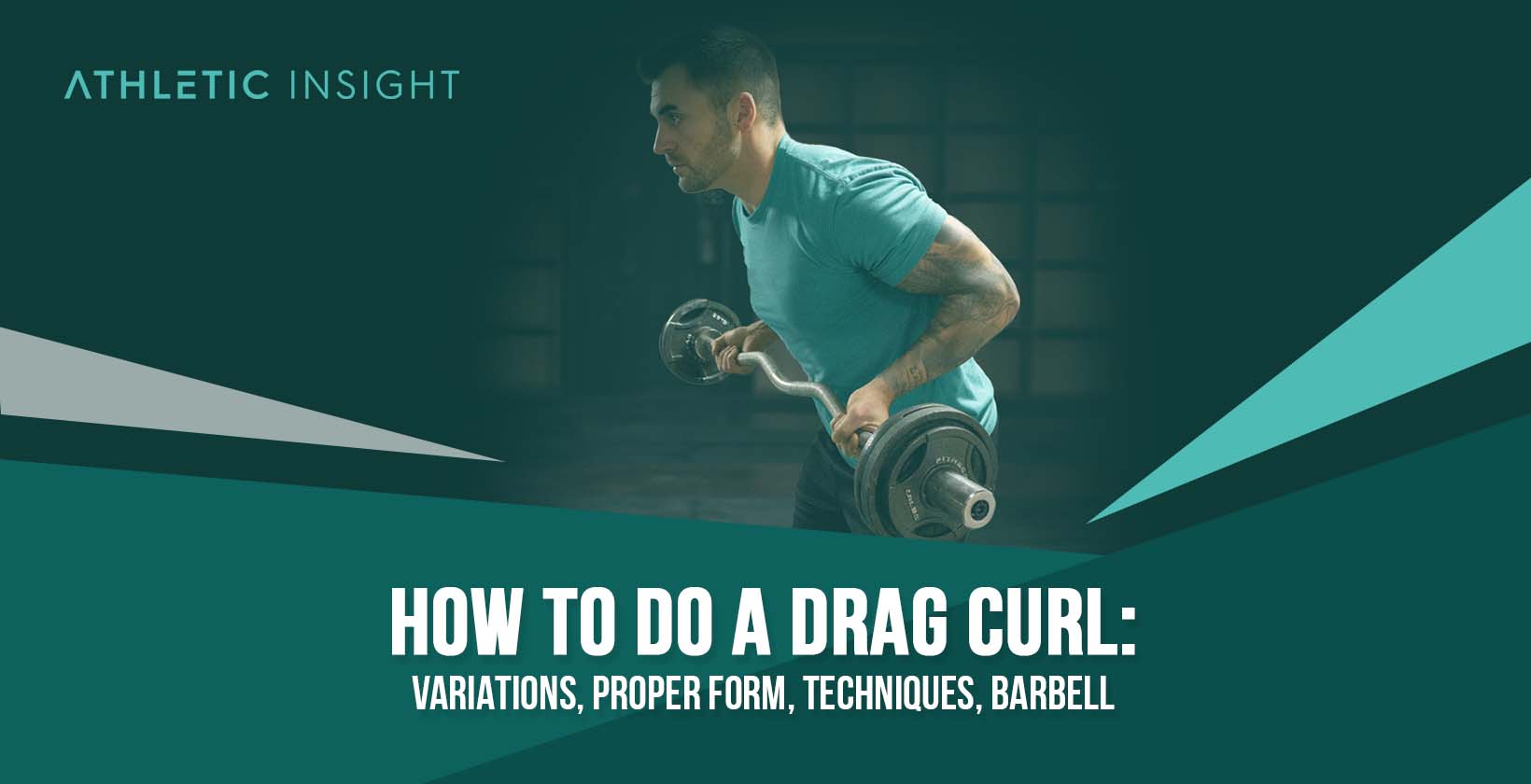 A drag curl is a compound weight training exercise that targets the biceps brachii. The main benefits of the drag curl are increased strength and definition of the biceps and improved grip strength. While many bicep workouts also target the shoulders, the drag curl focuses more on isolating the bicep.

To perform the drag curl, you take the barbell or dumbbells and place them shoulder-width apart. Then, you slowly bend your elbows while pulling them backward, bringing the weight up towards your chest. You should be flexing the bicep during this stage while also keeping the weight close to your body. Once you bring the weight up 90 degrees, slowly bring it back down to the starting position.

Traditionally, the drag curl is performed with a weighted barbell, but there are variations that utilize dumbbells, bands, and machines. There are also variations that utilize reverse grip. In fact, the barbell, dumbbell, bands, and machine drag curls can be done with your wrists pointing downwards as opposed to upwards. This targets your biceps but also the forearm.

To master the drag curl, it is critical that your form is perfect. Common mistakes include using too much weight, swinging the arms, and bringing the elbows forward. These common mistakes can lead to injuries such as torn biceps and joint issues. However, if you can follow the proper drag curl techniques, this exercise offers more benefits than risks.

How to Perform Drag Curl with Proper Form

Proper form means maintaining correct posture and physical movement during exercise. Learning to perform a drag curl properly involves being aware of your form before, during, and after this biceps exercise.

To dominate drag curl exercises, you’ll need to do the following.

Failing to adhere to these form rules can result in injury and reduce the beneficial effects of drag curls. This form functions to keep individuals safe from the shoulder, back, and arm injuries while also increasing the effectiveness of the barbell drag curl exercise.

What Are the Benefits of Drag Curl?

Those looking to build more muscular forearms and biceps may find that drag curl exercises are especially beneficial. Understanding the benefits of drag curls is an excellent way to determine whether this exercise might be suitable for you.

Here are the benefits of drag curl exercises.

What Are the Mistakes for Drag Curl Form?

The most common mistakes for drag curl form are listed below.

How to Determine Proper Weight for Drag Curl?

Individuals that haven’t performed drag curl lifts in the past or who are new to strength training will want to start with light weights (5lb to 10lb)or a weight-free barbell. When performing drag curls, fitness enthusiasts and weightlifters who lift much more may wish to use 25lb or 50lb barbell weights.

A general rule of thumb is that individuals should be able to maintain correct posture and form during a drag curl. If they’re struggling to do so, the weights on the barbell may be too much.

Which Muscles Are Involved While Performing Drag Curl?

Three muscles are involved while performing the drag curl exercise. Here is a summary of the muscles involved in performing drag curls.

What Are the Drag Curl Variations?

What Equipment is necessary for the Drag Curl?

A handful of workout equipment pieces are necessary to perform the drag curl exercise. Here is a list of the essential components of equipment for best drag curl.

A Smith machine is an optional but practical tool for performing barbell drag curls. They keep barbells vertical, reducing unintentional strain on the shoulders and back. You can also use dumbbells, bands, and machines.

What Are the Drag Curl Related Facts?

There are several interesting facts about drag curls and their impact on the body. Here are a few notable drag curl related facts.

Does Drag Curl Affect the Hormones?

Is Drag Curl Practiced Within CrossFit?

No, drag curls are not a part of CrossFit workouts. Instead, burpees, lunges, squats, and push-ups are typical CrossFit exercises.

No, the drag curl is not dangerous. That said, drag curls can be risky when performed with hefty weights. A Smith-machine drag curl is far safer, as it restricts a barbell’s movement, ensuring that each lift is entirely vertical.

Is Drag Curl Push or Pull?

Drag curl is a pull exercise. To perform this exercise, you’ll need to lift upward on a barbell, curling your arms slightly toward yourself. As such, drag curl involves pulling weight toward the body.

Yes, drag curl is essential when attempting to strengthen the biceps. Unlike other barbell lifts, the drag curl utilizes the forearm and biceps muscles instead of the deltoids and triceps.

Those looking to increase their bicep muscle mass will want to perform drag curls as part of their workout routine.

Is Drag Curl a Compound Exercise?

Drag curls exercise the biceps, forearms, and the brachialis elbow flexor. Because it works out multiple muscle groups, it’s considered a compound exercise.

What Can Replace Drag Curl?

A regular curl can replace the drag curl exercise. A standard bicep curl also strengthens the biceps and forearms, just like a drag curl.