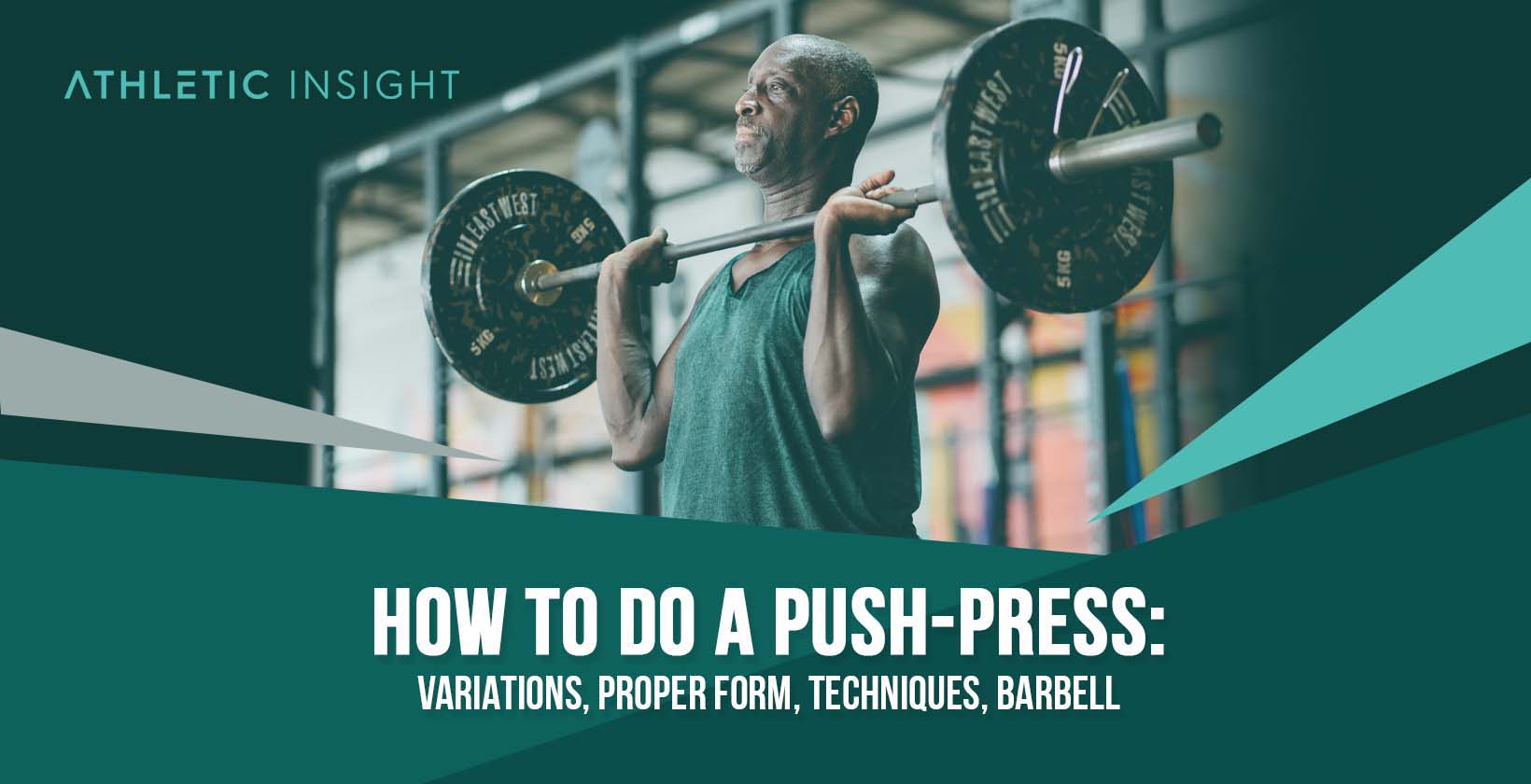 The push-press is a full-body compound exercise that utilizes the overhead press with your upper body and power from the legs to push the bar overhead. Performing push-press is essential for avid gym-goers, those who want to benefit their everyday health and range of motion, and dedicated athletes.

The push-press is commonly used in Olympic weightlifting to supplement Olympic lifts, such as the snatch and overhead squat. Furthermore, the push-press is used in CrossFit since it can help build shoulder strength and range of motion for common exercises, such as single-arm dumbbell snatches, overhead barbell squats, and power for plyometric exercises like jumping and burpees.

The proper push-press form involves standing with your feet hip-distance apart, placing the barbell across your chest at shoulder height, keeping your elbows pointing forward, dipping down into tea power stane, and pushing with your quads as you drive the bar straight overhead. Make sure to avoid driving the bar outwards instead of upward, keeping your elbows high, and using your legs to power the bar.

The main push-press mistakes to avoid include incorrect grip width (not being shudder-width apart), wrist being too bent and too relaxed, elbows flaring out during the pushing motion, lower back arching and strain, and pressing the bar forwards instead of overhead.

These common mistakes can occur in beginner and advanced users alike. If you make these mistakes, it can lead to common injuries that can derail your athletic performance. The most common push-press injuries include rotator cuff injury due to shoulder strain and repetitive motions, pinched nerve, and brachial plexus injuries.

How to Perform Push-Press with Proper Form?

To get the benefits of push-press, individuals need to learn how to use proper form. Proper form is essential when exercising, especially as a beginner. Proper form is doing this shoulder exercise correctly without the chance of injury and avoiding overuse and repetitive motion injuries.

To dominate the push-press exercise, individuals need to use the proper form. By learning to master push-press, individuals can get the necessary power benefits, range of motion benefits, and strength gains.

What are the Benefits of doing Push-Press?

There are numerous benefits of doing the push-press exercise to help athletes and gym-goers alike.

What are the mistakes for the Push-Press form?

Keeping proper form is essential to gaining the push-press benefits and avoiding injury. Push-press form must be kept in mind during this exercise’s preparation, set-up, and execution phase to prevent injury and reap the benefits. Good push herpes form for all users, whether they are a beginner or experts, should be considered when choosing weight, setting up the bar, and doing the exercise.

Some mistakes related to the push-press form include the following.

How to Determine Proper Weight for Push-Press?

Those who are new to using push-press in their workout regime need to determine the correct weight to avoid injury and overstressing their muscles. Individuals should start at a low weight and slowly increase over time to avoid injury. Beginner weight for the push-press is 47 pounds for females and 80 pounds for males. Individuals should start at 3 sets of 10-12 reps — once the sets become too easy and the reps are not taxing, individuals can increase by 2.5-5 pounds.

What is the importance of grip for Push-Press?

Grip is the measure of how much force you can generate with your hand and forearm muscles. Grip strength is essential in numerous exercises, especially those that incorporate bodyweight or holding heavyweight with barbells or dumbbells.

Gripping in the push-press is essential to keeping your wrist in the right position and avoiding dropping the barbell during the entire range of motion.

Which muscles are involved while performing Push-Press?

There are both upper body and lower body muscles involved in the push-press exercise.

What are the phases of Push-Press?

What are the Push-Press Variations?

A push-press variation is an alternate exercise that can tax the same muscles to varying degrees and make the user perform better at the original exercise (the push-press). Variations of push-press can be used to help an individual pareap the same benefits without performing the same exercise every time during a workout plan.

What are the necessary pieces of equipment for Push-Press?

The push-press exercise requires the barbell to perform correctly, with some users choosing to use a barbell squat rack for the racking efficiency.

Which muscles can be affected more from Push-Press?

The muscles used by the push-press are the deltoid muscles, trapezium, triceps, core, quadriceps, glutes, and hamstring.

What are the shoulder muscle exercises with Push-Press?

What are the leg muscle exercises with Push-Press?

What are the Push-Press related facts?

There are some interesting push-press related facts that may entice you to incorporate this exercise tin o your workout plan:

Does Push-Press affect the hormones?

The push-press is a compound lift that can affect hormones, such as increasing epinephrine, norepinephrine, testosterone, and HGH.

Since testosterone is a resistance exercise that builds muscle, it can increase testosterone. Restore is a hormone that increases the development of male secondary sexual characteristics.

Is Push-Press practiced within CrossFit?

The push-press is practiced within CrossFit to increase an athlete’s performance with other overhead movements, such as overhead squats, snatches, and clean and jerk.

Is Push-Press a military movement?

The push-press is a variation of a military movement, the military press. The push-press can increase your shoulder stability and strength for military exercise.

The push-press is not dangerous if you control the weight, learn the proper form, and avoid going up in weight too soon.

Is Push-Press an Olympic lift?

The push-press is not an Olympic lift but can be used to help Olympic lifting effectiveness, such as the clean and jerk and overhead squat.

Is Push-Press a compound exercise?

The push-press is a compound exercise that taxes the upper and lower body.

What can replace Push-Press?