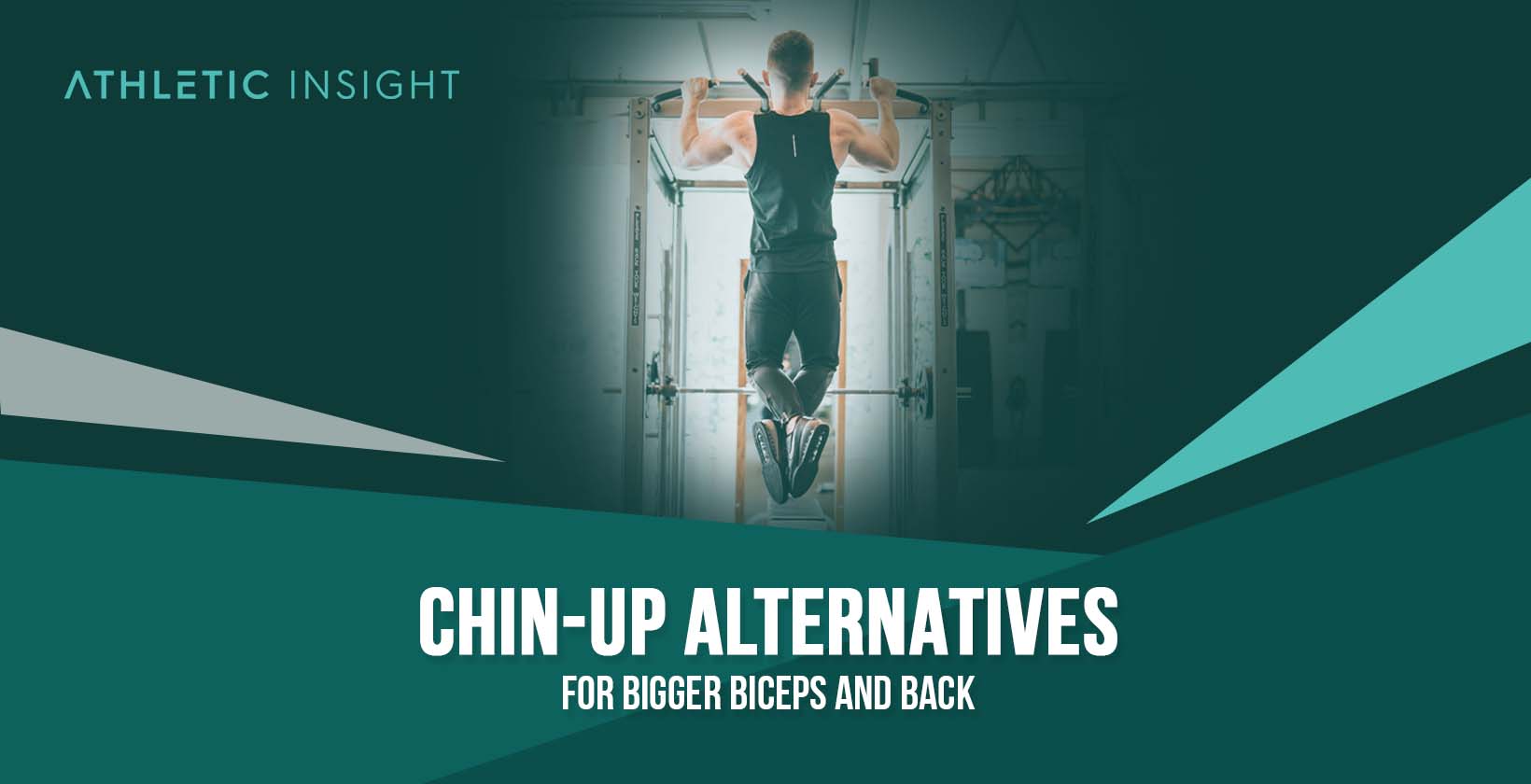 A classic chin-up is performed by hanging from a bar, using the arms to pull the body up until the chin reaches the bar. A strict chin-up is difficult for even experienced athletes to perform. A proper chin-up requires significant strength and control in the trapezius, rhomboids, biceps brachii, and latissimus dorsi.

Chin-up substitutes generally target the same muscle groups as the classic chin-up, though some modifications work different muscles as well.

These nine poplar chin-up alternatives are suitable for when you need to know what to do instead of pull-ups.

The most common mistake lifters make while performing the Lat Pulldown is involving the biceps too much, which reduces the emphasis on the lats. Try to widen your grip to reduce biceps movement and increase the workout for the latissimus dorsii. Bring the bar down to your chest instead of stopping at the back of your neck.

The Lat Pulldown is a beginner-friendly alternative to pull-ups that lifters can perform at a low weight to build up to the classic chin-up. It’s also suitable for advanced lifters who can increase the difficulty by adding more weight.

The Bent-Over Row chin-up alternative emphasizes the lower latissimus dorsii more than the classic chin-up because the lifter pulls the weight toward the body at a more perpendicular angle, as opposed to the vertical lifting movement of the chin-up.

The Bent-Over Row chin-up alternative should be chosen by lifters who want to target the lower lats more than the upper lats. It’s also suitable for lifters building up to the classic chin-up, as it can be performed with lower weights.

One common mistake lifters make while performing the Bent-Over Row is rounding the lower back, leading to injuries. Maintain good posture by keeping your knees bent and your back straight. Get the most out of the Bent-Over Row’s limited range of motion by pulling the barbell up as much as you can, completing the entire movement.

The Pendlay row is a weighted pull-up alternative that focuses on the upper and lowers back muscles for powerlifters and bodybuilders. A lifter performs a Pendlay row in much the same way as a regular bent-over row, lowering the barbell to the floor between each rep rather than stopping at full extension.

Like the Bent-Over Row, the posture of the Pendlay Row works the lower latissimus and trapezius muscles more than the standard chin-up. The Pendlay Row chin-up alternative should be chosen by lifters who want to improve overall strength and build strength for more challenging lifts. It requires more explosive pulling strength than the chin-up.

The standard mistake lifters make when performing the Pendlay Row is selecting too much weight. Try to choose a weight that allows you to do the movement properly for at least three sets, with 6-12 reps per set. Maintain back tension throughout the entire movement to avoid injury.

Because of its difficulty in maintaining proper form, Pendlay Rows are recommended only for experienced athletes and powerlifters. Novice lifters should avoid the Pendlay Row until they feel confident performing other rows like the Bent-Over Row. It is the same level of difficulty as a classic chin-up.

The T-Bar Row is a chin-up alternative that works the latissimus dorsii, trapezius, deltoids, and rhomboids for bodybuilders, powerlifters, strongmen, and strong women. The T-Bar Row is performed using a specialized lifting apparatus called a T-Bar, or a barbell with a T-Bar attachment.

The T-Bar Row v bar pull-up alternative works the lower latissimus dorsii and trapezius muscles more than the classic chin-up, for the same reason that other rows work these muscle groups. The T-Bar Row should be chosen by lifters who want to improve muscle mass and overall strength while targeting the lower traps and lats.

The most common mistake lifters make when performing the T-Bar Row is keeping their legs straight, which puts the back at risk of injury. To achieve the T-Bar Row safely, remember to bend your knees throughout the movement. Maximize your range of motion by using multiple smaller weights instead of single larger weights.

The T-Bar Row is an intermediate to advanced-level lift to perform safely and correctly. Novice lifters should avoid it until they have mastered the basic Bent-Over Row. It is approximately the same difficulty level as a classic chin-up.

The Single-Arm Dumbbell Row is a beginner-friendly chin-up alternative with dumbbells that focuses on the latissimus dorsi, deltoids, trapezius, and rhomboids for athletes and weightlifters. For this chin-up substitute, no bar is required. Single-Arm Dumbbell Rows are performed using a single dumbbell, one arm at a time.

The most common mistake lifters make when performing Single-Arm Dumbbell Rows is beginning with too much weight. Make the most of the single-arm dumbbell row by picking a lower weight than you think you need and performing it slowly. To get the correct form, it’s helpful to think about starting the movement in the shoulder rather than the elbow.

The Single-Arm Dumbbell Row is a beginner to intermediate level lift to perform correctly, especially at a low weight. It’s a beginner-friendly chin-up substitute for novice lifters to build the strength necessary to perform a chin-up.

The Renegade Row is another pull-up alternative with dumbbells that focuses on the latissimus dorsii, trapezius, deltoids, rhomboids, and core muscles for bodybuilders and athletes. The Renegade Row is similar to the Single-Arm Dumbbell Row but is performed in a plank position rather than standing.

The most common mistake lifters make when performing the Renegade Row is swinging the arms. Start with a lower weight to avoid the temptation of using momentum to complete the movement. Perform the full range of motion slowly to activate as many muscle fibers as possible.

Renegade Rows require a high degree of core body stability, which makes them challenging to perform for beginners. They should only be performed by experienced lifters.

The Inverted Row is a bodyweight chin-up alternative that focuses on the middle and lower trapezius and rhomboids for athletes and novice lifters. Inverted Rows are like rack chin-ups, performed hanging under the barbell rack instead of a chin-up bar.

The Inverted Row works the lower and middle trapezius muscles more than a classic chin-up because the movement is more like a classic row. Inverted Rows should be chosen by novice lifters looking to build up strength to perform a chin-up. They’re also a suitable choice for injured lifters returning to the gym.

The most common mistake lifters make when performing the Inverted Row is allowing the glutes to sag. Engage your core to keep the body straight, including the neck. Try to think about pulling your chest to the bar to avoid thrusting your chin out.

The Inverted Row is one of the most accessible chin-up alternatives to perform correctly. It relies on body weight and can be easily modified by adjusting the body angle.

The most common mistake lifters make when performing resistance band pulldowns is relying too much on the arms to perform the movement. Keep your focus on the muscles in your back to engage the proper muscles, and hold your upper body still to resist the temptation to use momentum.

Resistance Band Pulldowns are suitable for beginners who don’t yet have the strength to perform a chin-up. Experienced lifters can also modify them by using higher resistance levels for a more challenging lift.

The Deadlift is a weighted chins alternative that works the lower trapezius muscles for powerlifters and bodybuilders. It’s performed using a weighted barbell.

The Deadlift chin-up alternative should be chosen by powerlifters who want to build strength and bodybuilders who want to build bulk in their traps and lower back. The most common mistake lifters make while performing the deadlift is rounding their back, which increases the risk of injury.

To perform the Deadlift safely and effectively, focus on pushing your hips into the ground instead of pulling the weight up. Engage your core throughout the movement, and don’t lean too far back at the top of the rep.

The deadlift is hard to do correctly, and many beginners use an incorrect form, so it’s best reserved for experienced lifters. While it can build strength to perform a chin-up, the Deadlift is not a beginner-friendly alternative.

What to Know About Chin-Up Alternatives?

Chin-up alternatives help lifters work different muscles or the same muscles more effectively, as compared to the traditional chin-up. They can also help newer lifters build the strength necessary to perform the chin-up. Finally, they can be performed when a classic chin-up cannot, such as when the necessary equipment is unavailable. Here are the main facts to know about chin-up alternatives.

Which Chin-up Alternative Is Beginner-Friendly?

The Lat Pulldown is one of the best exercises for beginners. Because lifters can do it with almost no weight, it doesn’t require as much strength and has a lesser risk of injury. As the lifter becomes more experienced and builds strength, they can add extra weight to work up to a classic chin-up.

Which Chin-up Alternative Is Better for Biceps?

The Single-Arm Dumbbell Row is a chin-up alternative that is one of the best workout for your biceps. It still works out the back, but the single-arm movement isolates the bicep and shoulder as well. It can be performed after chin-ups or as a chin-up substitute.

Which Chin-Up Replacement Exercise Is Better for the Back?

The Resistance Band Pulldown is a chin-up alternative that’s better for your back, as it involves a pulling down motion, which reduces the risk of injury compared to other chin-up alternatives like the Pendlay Row. Adding the Chin-Up workout to any back workout routine will help develop the back muscles.

Which Chin-Up Substitute Is Better for Strength?

The Bent-Over Row chin-up substitute is best for improving overall strength. Whereas the chin-up relies on bodyweight, lifts like the Bent-Over Row allow lifters to increase the weight, building strength incrementally.

When Should an Athlete Use the Chin-Up Alternative for Exercise?

More experienced lifters should use an alternative chin-up exercise that allows them to lift more than their body weight, such as a T-bar row or Pendlay row, to achieve more gains than with a classic chin-up. Bodybuilders, in particular, should use chin-up alternative exercises to target muscles more effectively than a chin-up, such as renegade rows and lat pulldowns.

Can Chin-Up Alternatives Replace the Chin-up?

Yes, several chin-up alternative exercises in combination can replace the chin-up. In fact, many professional bodybuilders and athletes don’t do any chin-ups. They use deadlifts and rows instead to achieve their fitness goals.

What Are the Chin-up Variations?

There are several variations on the classic chin-up.