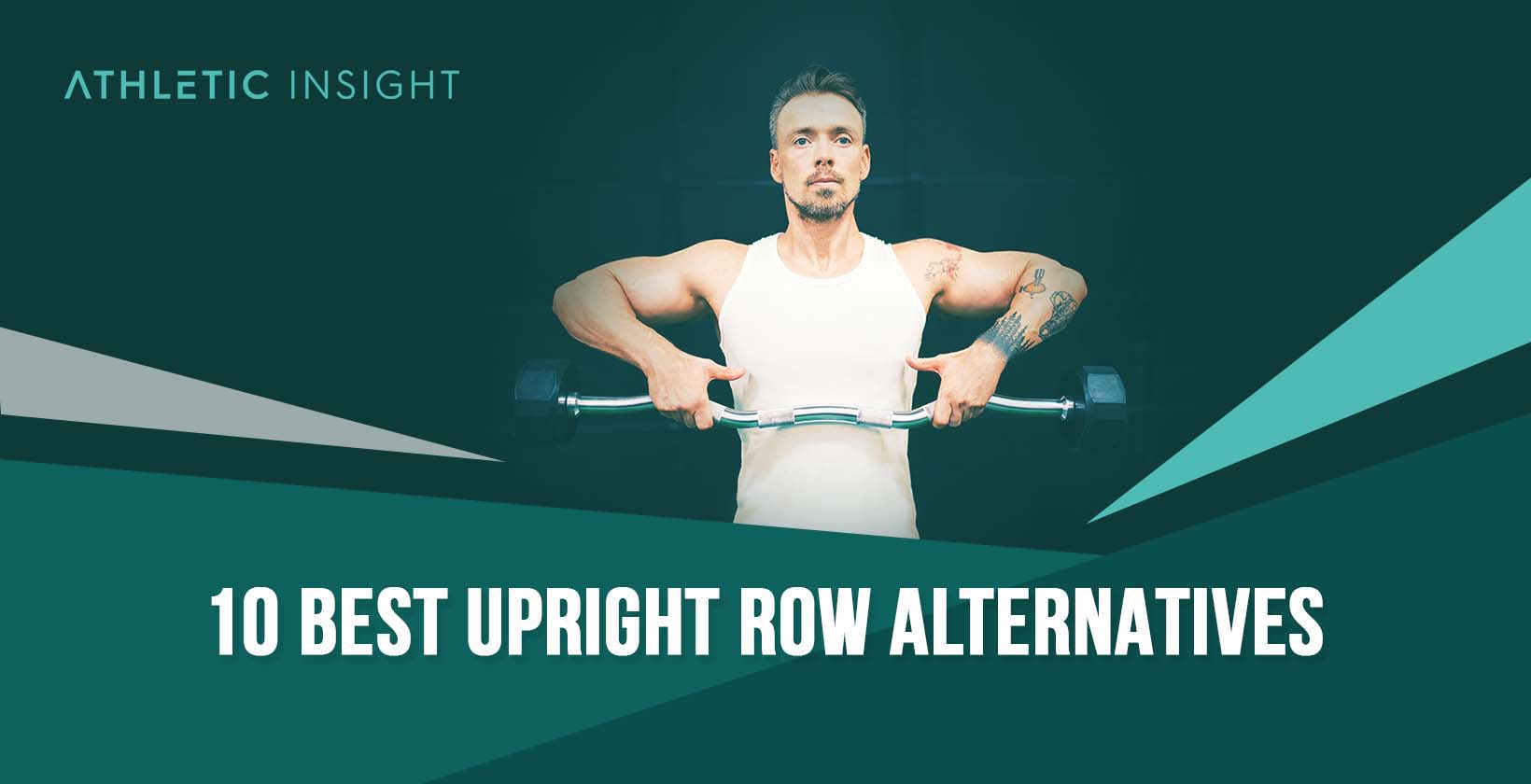 The upright row is an upper-body strength and toning workout that taxes the deltoids, latissimus dorsi, trapezius, biceps brachii, and brachialis. The upright row can be used for athletes who need to build the posterior chain of their upper body after doing excessive pushing motions, such as the bench press, overhead press, push up, and incline dumbbell press.

By balancing the posterior and anterior chain of the body, athletes make sure they are well-balanced and can use their force on their back and their chest. By focusing on the infraspinatus, lateral deltoid, teres minor, brachialis, trapezius, and serratus anterior, the upright row can help work out any muscular imbalances.

Furthermore, this exercise is especially helpful for weightlifters to increase mass, size, and strength in their upper body. Weightlifters who specialize in Olympic lifts will find the upright row helps with shoulder stabilization and upper back strength. This exercise can help Olympic weightlifters in exercises such as the clean and jerk, overhead squat, snatch, front squat, and overhead press.

In addition, bodybuilders who want to build the size of their upper back will love the upright row. Along with using the seated row and other row variations, the upright row focuses more on the trapezius and shoulders, helping build total size and the Y-shape they are looking for during bodybuilding competitions to improve their body composition and stature.

The seated muscle snatch compares to an upright row because it follows a similar motion while targeting similar muscles.

Alternatives of the seated muscle snatch are the standing muscle snatch, barbell snatch, overhead squat, dumbbell snatch, single-arm dumbbell snatch, and overhead wide-grip barbell press. One mistake to avoid during this exercise is to use your momentum to get the bar overhead. Users can avoid this mistake by sitting down and only using their upper body, forcing themselves to use their upper back and shoulders to lift the bar.

This is an intermediate exercise since it requires ample upper body strength and shoulder mobility.

Since the user will have to use their lower-body explosiveness to raise the dumbbell and their upper body to stabilize the weight, this is a full-body compound movement to help power and coordination. Athletes will benefit from this moment to help with their jumping and sprinting power, and weightlifters will benefit from this exercise to help with the ‘catch’ position in Olympic lifts.

This is an intermediate exercise since it takes lower-body explosiveness and total-body coordination.

The dumbbell lateral raise is a beginner upright rows alternative that works the deltoids, anterior deltoid, serratus anterior, supraspinatus, and triceps brachii. This exercise is good for upper-body athletes who need to work out any muscular imbalances and for bodybuilders who want to increase the size of their shoulders.

The dumbbell lateral raise compares to an upright row because it targets the side delts primarily.

This is a beginner-friendly exercise since it requires very little mobility and form.

The band lateral raise is an upright row alternative that works the anterior deltoids, lateral deltoid, serratus anterior, supraspinatus, and core muscles. Since the user will have constant tension on the band, the core will be worked to help avoid any movement in the upper body.

The band lateral raise compares to an upright row because it isolates your lateral delts.

Alternatives of the band lateral raise include the dumbbell lateral raise, band front raise, band Y-raise, lateral cable raise, EZ bar front raise, and barbell front raise. One mistake to avoid with this exercise is raising the band too high over your shoulder height. Users can prevent this mistake by only going as high as their shoulders and keeping a straight arm.

This is a beginner to intermediate-level exercise because it requires more muscular endurance.

The cable face pull is an alternating upright row option that works the lateral deltoid, posterior deltoid, triceps, trapezius, teres minor, and infraspinatus. This exercise is good for bodybuilders who want to build their upper back and for athletes who need to balance out a pushing exercise.

The cable face pulls compare to upright rows because it targets your deltoids, rhomboids, and biceps.

This exercise is excellent for beginners because the posture is easy to master.

The TRX YTW is an alternative exercise for an upright row that works the teres major, rhomboids, trapezius, triceps brachii, and core. Since the users will be using the suspension, it will tax their core and stabilization more so than other variations. This is a good exercise for athletes who want to build relative strength.

The TRX YTW compares to an upright row because it allows you to exercise similar muscle groups, but you can use your body weight.

Alternatives of the TRX YTW include the dumbbell YTW, dumbbell front raise, dumbbell lateral raise, TRX bodyweight row, TRX push-up, and TRX plank. One mistake to avoid with this exercise is to use momentum and swing your body. Users can avoid this mistake by breaking their core and going through slowly.

This is an intermediate exercise because it requires you to be able to pull your body weight.

The dumbbell YTW is an alternative exercise to an upright row that works the deltoids, serratus anterior, latissimus dorsi, trapezius, and triceps brachii. This exercise works multiple planes of motion and different angles of your muscles, making it a good choice for upper-body athletes with injury prevention and weightlifters who need to bulletproof their shoulders.

This exercise compares to an upright row because it works your shoulders and other muscles with multiple ranges of motion.

This is an intermediate exercise because you need a decent amount of muscular tension and endurance.

The dumbbell lateral raise is an alternative for an upright row that works the posterior, anterior, and lateral deltoids. This exercise is good for weightlifters and bodybuilders who want to isolate their shoulders for extra growth.

The dumbbell lateral raise compares to an upright row because you’re exercising the same muscle groups.

This is a beginner to intermediate-level exercise since the proper form is needed to ensure you don’t injure yourself.

The dumbbell farmer’s walk is a full-body exercise that works the levator scapulae, upper trapezius, obliques, wrist flexors, gluteus maximus, quadriceps, hamstrings, gastrocnemius, soleus, rectus abdominis, and adductor Magnus and can work as an upright row alternative. This is a good full-body exercise for athletes.

A dumbbell farmer’s walk compares to an upright row because it works your shoulders, but it doesn’t require pulling weights back, just holding them in place as you walk.

This is an intermediate-level exercise since it requires full-body activation.

What to know about Upright Row alternatives?

Which Upright Row alternative is better for Shoulders?

Which Upright Row replacement exercise is better for Deltoids?

Which Upright Row substitute is better for strength?

When should an athlete use the Upright Row alternative for exercise?

An athlete should use an alternative upright row workout to tax more muscle groups and activate their entire body, such as the dumbbell farmer’s walk or the TRX YTW.

What are the advantages of modifying Upright Row?

The advantages of modifying the upright row are to avoid injuries that can occur from overuse and repetitive motions. Beginners can change the upright row to make it easier and more suitable for their level. Furthermore, athletes and weightlifters can modify the upright row for their specific goals.

No, alternative exercises to upright row exercises cannot fully replace the upright row, but they can provide similar muscular benefits.

What are the Upright Row Variations?

There are numerous alternative exercises for upright rows that are suitable for a person’s specific needs.