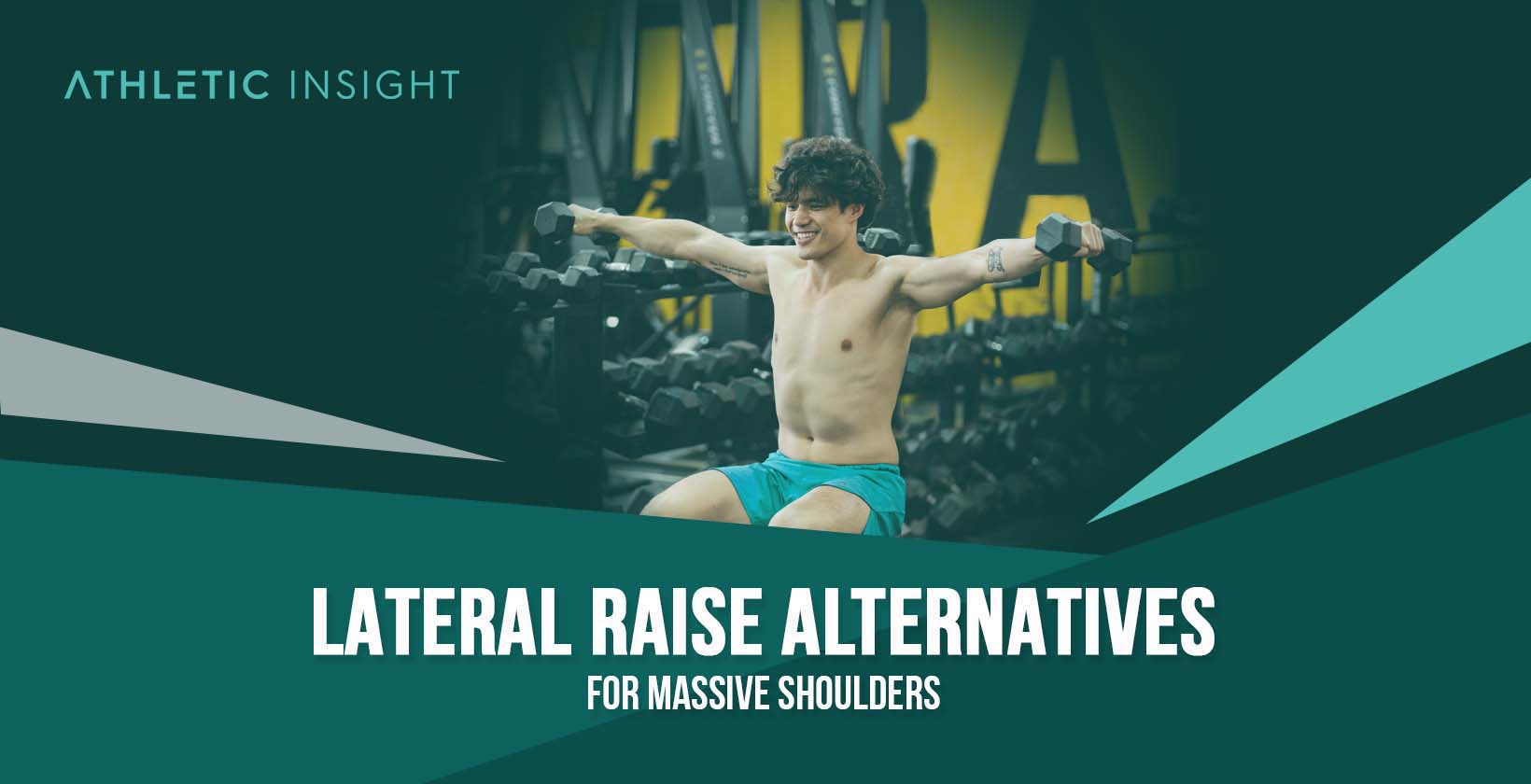 Lateral raise alternatives are isolation exercises that build strength and define the muscles in the medial deltoid. Alternatives to lateral raises help create a broader looking back and a defined, round shoulder.

A traditional lateral raise requires a perfect form. Individuals who are new to weight lifting or this particular exercise may want to try out some lateral raise variations to build strength and practice form before jumping into normal lateral raises.

For example, the seated Arnold press variation involves lifting weights while sitting at a 90-degree angle. It focuses on all of the major muscles in the shoulder through subtle but effective movements.

Other variations of the lateral raise include the behind-the-neck overhead press, the barbell military press, and reverse flys. These exercises target the back, shoulders, upper arms, and grip strength.

You can also build the same muscles a lateral raise would target through bodyweight exercises such as the yoga pose downward dog.

Those looking to build strength in their upper back, upper arms, and shoulders can alternate exercises for side lateral raises are abundant.

At their core, lateral raise alternatives are designed to build massive shoulders from both a strength standpoint and an aesthetic one.

The Seated Arnold Press is a Lateral Raise alternative that targets the entirety of the shoulders, as well as the triceps and the trapezius muscles of the back.

This intermediate move can be performed by weightlifters, bodybuilders, or athletes of any gender looking to build strength and tone the shoulder area.

The move is a dumbbell lateral raise alternative that requires the individual to sit at a 90-degree angle and push the weight in each hand upward. The movement starts with the palms facing in towards the body and ends with them facing outward at the top of the press.

Common mistakes while performing this exercise are poor posture and using too much weight to start. This is a more advanced exercise than the traditional shoulder press and should be done carefully to avoid injuring the shoulders.

To perform Seated Arnold Press correctly, be sure to observe proper posture and to move through the motions at a careful and intentional pace.

2. Behind the Neck Overhead Press

The Behind the Neck Overhead Press is a Lateral Raise alternative that targets the entirety of the shoulder muscles, upper back, triceps brachii, and serratus anterior. It also works the core, glutes, and muscles of the leg as it is performed standing.

This is an advanced move that should only be completed by experienced lifters with a spot present. When done incorrectly, either because of poor form or too much weight, it can strain the neck and shoulders.

This is typically a seated lateral raise alternative that requires a weighted barbell. The bar should be placed behind the neck and above the shoulders with hands wider than shoulder-width apart. On an exhale, the barbell is pushed upward above the head for anywhere from 12 to 15 reps. All movements should be slow and controlled when doing this exercise.

To get the most out of this move, you want to observe consistent control throughout the entire exercise. Avoid letting the bar crash into your shoulders or the back of your neck. You also want to keep your head and neck in one position when pushing the bar overhead.

When done correctly, this exercise can also help you perform other exercises like Snatches or Jerks.

3. Side Plank with an Arm Raise

The Side Plank with an Arm Raise is a Lateral Raise alternative that targets the shoulders, hips, and obliques. This is an excellent exercise for women, individuals who do pilates or yoga, as well as people with weak back muscles.

Overall, the side plank with an arm raise is a beginner-friendly exercise that doesn’t require any equipment to perform.

This lateral arm raises alternative is done by supporting the body’s weight on the hand or elbow in an elevated side plank. The arm not bracing against the ground reaches into the sky while the hip, thigh, and calves are lifted off of the ground.

This lateral raise bodyweight alternative can be done with or without a dumbbell. Hold for 15 to 60 seconds or until failure.

A common mistake with this move is allowing the hips to drop. Keeping your body aligned throughout the exercise will ensure the appropriate muscles are being worked on and help avoid injury or muscle strain. You also want to avoid arching your lower back or bending your knees.

The Barbell Military Press is a lateral raise alternative exercise that targets every major muscle group, including the back, chest, shoulders, upper arms, core, and glutes.

This is a basic, all-around shoulder lateral raise alternative that should be done by athletes and weightlifters of all skill levels to increase strength and improve outward appearance.

This move can be completed seated, but most prefer to do it standing to get the full benefit of the exercise. The Barbell Military Press is harder to do than a move like the Bench Press and requires balance and good coordination to do properly. To sculpt the shoulders, the move should be used with a heavyweight in rounds with 5 to 6 reps.

Common mistakes seen with barbell military press include arching the lower back or rounding the upper back and having a grip width too far apart. To be successful with this move, it is important to maintain a tight core for support and keep your gaze focused straight ahead. Your hands should be slightly wider than shoulder-width apart.

Downward Dog is a yoga pose that targets the chest and shoulders and helps align the spine for better posture. This alternative to shoulder lateral raise is a gentle, bodyweight exercise that can be completed by anyone new to strength building or people looking for a way to tone up their shoulders on off-days.

To complete a downward dog, hands should be shoulder-width apart, and feet should be hip-width apart. The individual should press their hands into the mat or floor and lift their hips into the sky, creating an upside-down “V” shape with the body. Hold the post for several deep breaths.

Some common mistakes with this exercise include having a narrow stance, leading to bent legs, or rotating the arms inwards. It is important to keep the arms straight beneath the shoulders, the armpits lifted forward, and to keep your ears between your biceps.

This is also an excellent warm-up exercise for weight lifters on shoulder day or cool down for athletes after a practice or game.

Face Pulls are a cable lateral raise alternative that works the trapezius muscles of the back as well as the teres major, teres minor, and the posterior deltoids. This move requires a cable machine but can be done by any weightlifter, bodybuilder, or athlete.

The cable machine should be set up at chest level when standing. Users grab hold of the two-handled rope and step away from the cable machine and begin pulling the rope back toward their face in a slow, controlled movement. At the top of the pull, the shoulder blades should contract.

This exercise can be completed seated or standing. It can also be done with resistance bands if you don’t have access to a cable machine.

Common mistakes with this move include dropping the elbows below the wrists at the top of the pull and setting up the cable pulley too high on the machine. Some people new to the move tend to overload the weight they use as well. This can lead to more focus on the lower back rather than the shoulders.

To avoid these mistakes and complete this move successfully, be sure to move through each rep at a slow and controlled pace and work with lower weights to start out.

Reverse flys are a bent-over dumbbell lateral raise alternative that targets the rhomboids in the shoulders and upper back region of the body. These not only strengthen the back and improve posture, but they are great for preventing shoulder injuries.

Reverse flys can be completed by men and women who are looking to tone their upper back muscles and help define the shoulders. Especially if they work in an office or at a desk. They are considered beginner-friendly exercises.

The move can be completed sitting or standing but requires two dumbbells. A dumbbell should be placed in each hand with the body leaning forward. In a controlled movement, the individual lifts the weights upward until their elbows are level with their shoulders and then brings them slowly back to start for 1 rep. 3 to 4 rounds of 12 to 15 reps are generally advisable for best results.

Common mistakes seen with this move are poor posture, such as hunching over or arching the back. Many who are new to the lift also tend to swing their weights, which doesn’t help target the back and shoulder muscles.

This move can be successfully done by maintaining a straight spine and a tight core. It is also important to use the right amount of weight to avoid straining the neck, back, and shoulders.

What to Know About Lateral Raise Alternatives?

Let’s address some of the facts about Lateral Raise alternatives.

Which Lateral Raise alternative is beginner-friendly?

The Downward Dog pose is a lateral raise alternative at home that is also beginner-friendly. It doesn’t require the use of any fancy or expensive equipment and will help gently build the strength required to make the more advanced weightlifting moves later on. It also has benefits for the spine, legs, glutes, chest, and neck.

Which Lateral Raise alternative is better for Shoulders?

The best Lateral Raise alternative for building better and stronger shoulders is the Seated Arnold Press. This simple but comprehensive exercise targets the posterior deltoid, the lateral deltoid, and the anterior deltoid muscles of the shoulder.

Which Lateral Raise replacement exercise is better for the Back?

If building a better back is the goal, the best lateral raise alternative exercise is Reverse Flys. These target the major muscles of the back and will also help build strength and improve posture.

Which Lateral Raise substitute is better for strength?

The Military Barbell Press is the Lateral Raise Alternative that is best for overall body strength. It works out multiple muscle groups in addition to the shoulders, including the core and glutes.

When should an athlete use Lateral Raise alternatives for exercise?

Athletes should use Lateral Raise alternate exercises to vary up their strength routines and avoid overworking certain muscles of the body.

What are the Lateral Raise Variations?

In summary, some of the best Lateral Raise variations commonly performed by strength and bodybuilders, athletes, and more are the Seated Arnold Press, Behind the Neck Overhead Press, Barbell Military Press, Downward Dog, Face Pulls, and Reverse Flys.