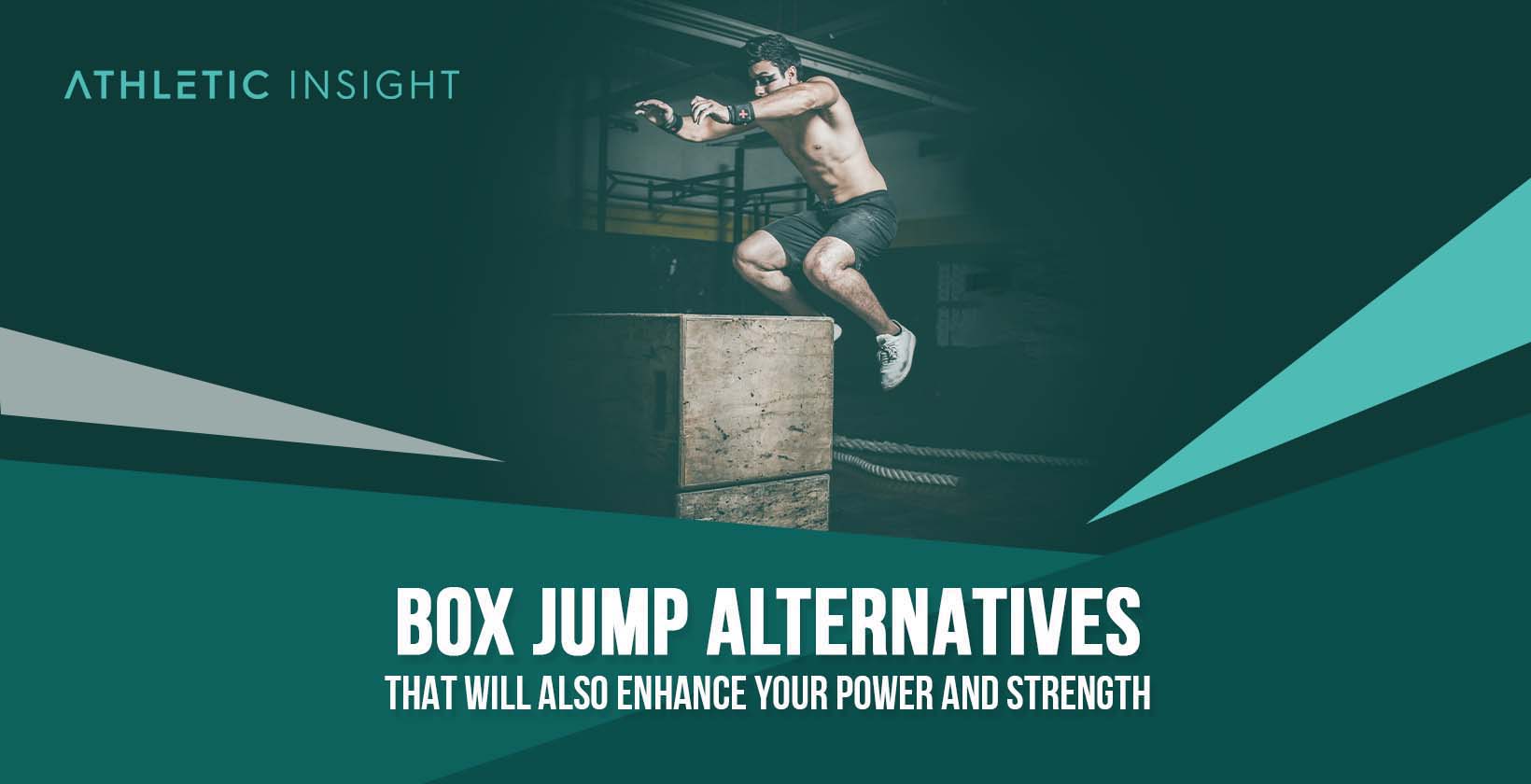 The box jump is an advanced exercise that helps you build more strength in your glutes, hamstrings, gastrocnemius, and rectus abdominis muscles. Box jump alternatives may be preferred because they do not aggravate knee pain and may target more specific muscle groups, like the glutes or gastrocnemius.

Fortunately, there are alternative exercises for box jumps, including classic, bodyweight, and strongmen variations. These box jump alternatives work the same muscle groups as the box jump but can be done by anyone, even beginners, in any gym environment. Many box jump alternatives, like lunges and step-ups, are more beginner-friendly, while other exercises, like the trap bar deadlift or squat-push press, are more advanced exercises.

Many box jumps, like the lunge or squat, are even more popular for weightlifters or athletes than the default box jump. These alternatives isolate the gluteus maximus, quadriceps femoris, and hamstrings. Box jumps alternatives can increase power and strength when they’re performed in sets of three or four with five reps in each and several minutes of rest between each set.

Lunges are a box jump alternative that primarily activates the gluteus maximus, biceps femoris, quadriceps femoris, and gastrocnemius and is ideal for beginners that aim to be weightlifters or bodybuilders. To increase strength during the workout, you can perform the exercise with a barbell or dumbbells, while even just bodyweight lunges are still among the best exercises for beginners.

For weightlifters or bodybuilders that deal with knee or ankle pain, knee and ankle braces can provide more support when performing the lunge. Aligning your knees and feet during the lunge exercise may also ensure there’s less knee pain during the workout.

Squats focus on the gluteus maximus, minimus and medius, the quadriceps, biceps femoris, adductor longus, Musculus iliopsoas, and gastrocnemius. This exercise can be beneficial for weightlifters, strongmen, and bodybuilders since it’s an incredibly functional and versatile exercise.

These squats are a beginner-friendly exercise, but to increase difficulty, you can always add a kettlebell weight. However, using weights that are too heavy before you’ve mastered the proper form for squats could put you at risk for injury and increased knee pain.

The trap bar deadlift is a great box jump alternative exercise that targets the glutes, bicep femoris, quadricep femoris, erector spinae, lats, traps, and grip, and is ideal for weightlifters and bodybuilders that have back issues and want an alternative that doesn’t put as much stress on the lumbar spine.

Although it does require a little extra equipment, this is still a beginner-friendly exercise. To do the movement properly, make sure you brace your core and take a deep breath before lifting. If you want to avoid putting more pressure on your lower back, make sure you’re lifting with your legs, not your back.

Squat jumps are another box jump-over alternative that focuses on the gluteus maximus, minimus, and medius, the quadriceps, the biceps femoris, and gastrocnemius. This exercise is ideal for runners or athletes that want to increase strength and endurance while still getting a cardio workout too.

This alternative is just as beginner-friendly as the regular squat but may be easier to perform for athletes that already know how to execute squats. When performing squat jumps, propelling forward with the knees can increase knee pain. Using the glutes and hamstrings to power, the squat jump can help runners land more softly.

The tuck jump is a plyometric exercise that targets the quadriceps, glutes, and biceps femoris and is ideal for runners or athletes that frequently do cardio workouts but is also popular with powerlifters and bodybuilders to develop lower body strength.

Tuck jumps are a more advanced exercise, and like squat jumps, they require some explosive movement, so they are not a good box jump alternative for bad knees, hips, or backs. To help avoid injury, make sure you do a proper warm-up before you transition into this exercise. To increase difficulty, you can perform regular squats in between each tuck jump.

Broad jumps are another plyometrics exercise that targets the quadriceps and also, to some degree, involves the hip flexors, gastrocnemius, and biceps femoris. This alternative is popular with runners and weightlifters to develop more power in their lower bodies and improve the reaction of fast-twitch muscle fibers. They are not a low-impact alternative to box jumps and should not be attempted by people with knee problems.

Jumping too far can make it harder for some athletes to keep the proper form, so keep the distance of your jumps comfortable to avoid sacrificing technique or risking injury. To give your broad jumps even more power, make sure you utilize your arms and hips.

Step-ups, unlike squat jumps, broad jumps, and tuck jumps, are a low-impact alternative to box jumps that targets the glutes, biceps femoris, and quadriceps femoris Step-Ups may be ideal for beginners and advanced athletes alike and are popular for people who want to improve their range of motion in the hip joints. They do require some equipment. However, unlike the box jump, alternative equipment can be used. You can do step-ups on stairs, a coffee table, a low chair, or even a couch.

Beginners can perform step-ups without weights, while bodybuilders, powerlifters, and other weightlifters might want to do them with a barbell or dumbbells. To work your hamstrings and glutes, use a higher step, but for targeting the quadriceps, use a lower step.

One of the best alternative exercises for box jumps is the squat push press, which works the glutes, hamstrings, quadriceps, triceps, trapezoids, deltoids, shoulders, and core. This alternative is popular for weightlifters that are looking to increase their strength in shorter amounts of time.

You can do it with or without weight, but it’s ideal for performing the exercise with a pair of dumbbells. Be careful not to start with your feet too wide when you do this movement; feet should only be parallel. The squat push-press should be performed in five reps, and if athletes still feel capable of performing more of the alternative exercise after they’ve completed the five reps, they may want to increase the weight.

What To Know About Box Jump Alternatives?

Some of the most important facts about box jump alternatives are listed below.

While regular box jumps work most of the lower body, some box jump alternatives can be ideal variations if you’ve got limited space, want to work on specific muscles, or need to accommodate joint or muscle pain.

A beginner-friendly box jump alternative is the step-up. Beginners and people with injuries should not attempt the advanced plyometric moves on this list. These include the squat jump, tuck jump, and broad jump. Start with a low step, and increase the height as your fitness level improves.

Another beginner alternative to the jump box is the squat. It’s recommended that beginners perform this movement without weight and only add weight as they feel comfortable and safe.

Which Box Jump Alternative Is Better for Glutes?

Lunges are the box jump alternative that targets and isolates the glutes. While every box jump exercise alternative on this list utilizes the glutes, some target the glutes more effectively than others. Lunges, for example, primarily target the quadriceps, and beginners struggle to engage their glutes during tuck and broad jumps.

If you’re looking for the best box jump alternative that specifically targets glutes, squats and trap bar deadlifts are another option.

Which Box Jump Replacement Exercise Is Better for Legs?

The lunge is one box jump replacement for working legs. All lower body exercises are good for legs to some degree, but if you want to target muscles like the quads and hamstrings, then the best alternative to box jumps on this list is the lunge. Some of the other best leg exercises include squats and deadlifts.

Which Box Jump Substitute Is Better for Strength?

The squat push-press and trap deadlift are the ideal box jump substitutes for strength. Depending on what type of strength you want to build, any of the box jump alternatives on this list will help you.

When Should an Athlete Use a Box Jump Alternative for Exercise?

An athlete should consider using an alternative to box jumps if they are caring for an injury, deal with muscle or joint pain, or don’t have the right setup to perform the box jump. If you don’t have access to a box or don’t have space in your home to do box jumps, then it’s also good to consider a box jumps alternative exercise.

What Are the Advantages of Modifying Box Jump?

The main advantage to modifying the box jump is getting a workout that’s more specific to certain muscles, such as the gluteus maximus, gastrocnemius, biceps femoris, and quadriceps femoris.

Yes, the box jump alternatives can replace the box jump. Depending on your fitness level, you might not be able to do a regular box jump. In this case, a box jump exercise alternative might be all you can do. There is nothing wrong with replacing exercises with ones that are more suited to your fitness level. Never risk injuring yourself while performing an exercise.

What Are the Box Jump Variations?

All box jump variations modify a box jump while still using the box and doing essentially the same movement, such as the following.