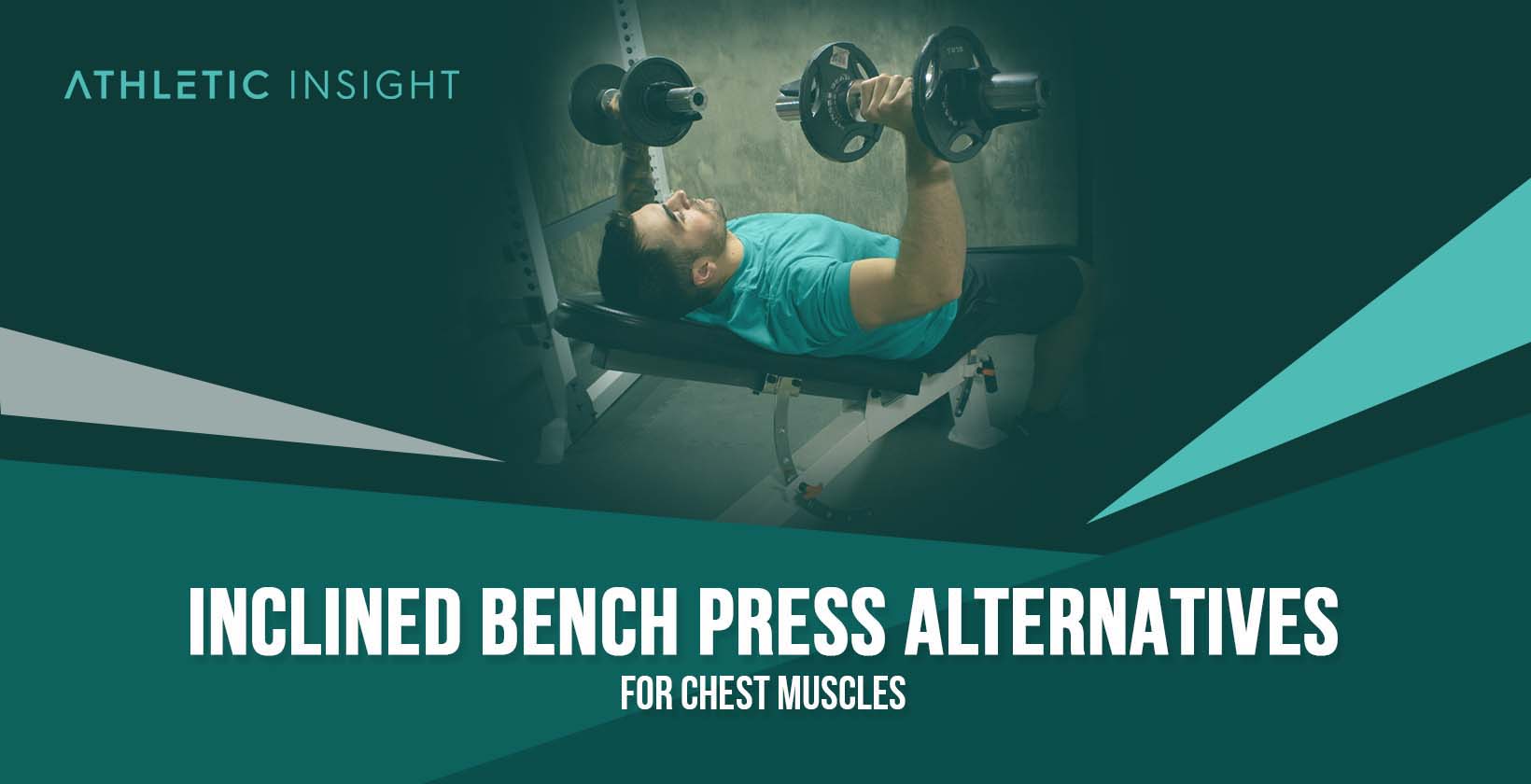 The incline bench press is a compound exercise that targets the upper part of the pectoral muscles. While beneficial, there are instances where an alternative exercise is better suited for the individual working out. Incline bench press alternatives work the same chest muscles using different movements and equipment.

An alternative for incline bench press will focus on the upper chest and shoulders more than the deltoids and trapezius muscles in the back since the main exercise specifically targets the chest. These exercises engage all the upper body muscles but don’t engage the latissimus dorsi as many other upper body exercises do.

This exercise is good for beginners and provides more intense training for athletes because each arm works independently. The muscles engage the same way in this incline bench press alternative, but they work harder because they have to move independently instead of with a barbell.

To perform the incline dumbbell press, lie on an incline bench set at roughly 30 degrees and hold the dumbbells on the sides of your chest. While 30 degrees is the recommended angle, you can change up the angle to further variate the exercise movement. Next, press up the weight, followed by a slow and controlled decline back to the starting position. This is one full repetition.

Common mistakes of the incline dumbbell press are holding the hands too far from the body and not pushing them straight up. Both of these mistakes will not only lead to improper targetting of the muscles but may also lead to joint pain and shoulder tears.

The decline push-up is an incline bench press exercise alternative that targets the upper pectoral muscles while also benefiting the triceps, shoulders, and back. The decline push-up takes a considerable amount of arm and chest strength to do properly, making it a more advanced push-up.

Decline push-ups work well for bodybuilders and weightlifters but may be too hard for beginners, especially those with weaker chest and arm muscles.

To perform decline push-ups, put your feet on a platform off the floor and stretch out, bracing your hands on the floor to hold your body up in a push-up position. Your head should be lower than your feet to engage the upper chest as you do push-ups in this position.

A common mistake of the decline push-up is putting the feet lower than the head, which won’t cause any damage but will not target the correct muscles and angles. Push-ups are still good exercises in this position, but they engage the lower chest and back muscles more than the upper pecs.

The dumbbell chest press is excellent for upper bodybuilding and pectoral strength training. Not only is it used by professional, top-performing athletes, but it is also considered a beginner-friendly workout as well.

To perform bench dips, sit on a bench and put your feet out as far as you feel comfortable. Next, put your hands on the bench next to you, and push until your bottom is off the bench.

Lower and raise yourself with this movement. Don’t make the mistake of rocking the hips to move instead of using the arm muscles. Lower yourself in front of the bench or chair as far as you feel comfortable, but if you go too far in the beginning, you can strain your arm or shoulder muscles.

Avoid letting your arms drop to the floor but lower the weights steadily with control for better muscle engagement. Also, don’t let your arms spread. Both of these common mistakes of the floor press may lead to joint pain and muscle tears. Instead, push the weights straight up and slightly together.

Athletes at any level can benefit from this exercise, but it is considered a more advanced exercise where a spotter is highly recommended. To master the floor press, you’ll want to take your time developing the perfect form.

To perform the standing cable chest press to work, the upper pectorals, like the incline bench press, stand in front of the cable machine facing away from it while holding the machine handles. Bend your elbows and put one foot in front in a lunge position. Next, press your hands forward and together. Do half of these with one leg in front and switch for the other half to engage the core muscles and both legs.

To spread the impact across the back and chest muscles, do the standing cable chest press variation where you stand between the pulleys and press forward and in. Again, don’t make jerky movements or let the weights drop.

Both standing cable chest press alternatives work for all levels, from beginners to strongmen. Since both variations of this alternative are done with a machine rather than free weight, it is recommended to go slow and really hone in on the form throughout the movement.

The dumbbell pullover is an incline bench press alternative exercise that targets the chest and triceps. This exercise is performed by all athletes but is considered a more advanced alternative.

To perform the dumbbell pullover, rest your upper back against a weight bench at a 45-degree angle and lower a single dumbbell, held by both hands, behind your head, then lift it straight up and lower it again.

Don’t let the dumbbell drop too low behind your head. You can strain a muscle or tendon by letting it drop. Also, don’t use too much weight where you can’t control it, or hold it up, to reduce the risk of injury. Form and volume are more important here, not weight.

If you are looking for an alternative to the dumbbell pullover, the bench can be replaced with a plyo or yoga ball, making it much more difficult. You can also use bands or a pulley system to further variate this exercise.

This criss-cross motion engages the pectoral muscles even more than a cable chest press, making it an effective chest exercise and alternative. Depending on the angle of the pullet system, and can replace the incline, decline, and the standard Olympic style bench press.

Common mistakes of the incline bench press include swinging the arms wide during a push and trying to cross them too far in front of you. While this mistake will still work out your upper body, it’ll target the back more than the chest which is not what you want.

The chest press machine exercise is an alternative to the incline bench press that targets the pectoral muscles and is suitable for all weightlifters. Using a chest press machine makes mistakes and poor form less likely than using a barbell or dumbbells, which is why beginners often start here.

The chest press machine exercise involves lying on an incline bench beneath a press machine. Next, reach up and grab the handles to press up. Before engaging in the press, ensure that your feet and buttocks are planted and that your core is tight and activated. The machine action eliminates the ability to let hands swing wide.

Though this exercise is good for beginners, bodybuilders and strongmen can perform it with heavier weights without the worry of dropping or losing control of a heavy barbell or dumbbell.

How to Choose an Incline Bench Press Alternative?

To choose an alternative bench press exercise, focus on your goals. For example, if you want to engage the entire upper body, choose an exercise like the decline push-up or the standing cable chest press.

Which Type of Incline Bench Press Exercises Alternative is Good for Weightlifters?

The cable crossover is the best incline bench press alternative for weightlifters. The chest press machine with heavy weights is also a good choice, and it’s easier to keep proper form and be safe, especially when using heavier weights.

Which Type of Incline Bench Press Exercises Alternative is Good for Athletes?

The dumbbell incline bench press alternative called the decline push-up is good for athletes. The bench dips also work the chest muscles and engage the core muscles. These exercises use your body weight as resistance.

These exercises are difficult for beginners before they’ve built arm strength, but athletes can benefit from the more challenging movements.

Which Type of Incline Bench Press Exercises Alternative is Good for Bodybuilders?

Bodybuilders focused on shaping and building the muscles over endurance or strength can benefit from the cable chest press and crossover.

These incline bench press alternatives let you engage every part of the pectorals and upper body muscles simply by changing your position in front of or between the pulleys.

Which Type of Incline Bench Press Alternative is Difficult to Perform?

The incline bench press alternative that’s most difficult to perform uses your body weight as resistance. The decline push-up is difficult for beginners because it requires existing arm strength to maintain the movement and proper form.

Bench dips require considerable arm strength, too. The exercise is an incline bench press alternative at home because you can use a chair instead of a bench, but it can take a while to build enough strength to do the movement properly.

What Are the Incline Bench Press Variations?

The incline bench press variations move the body similarly to the incline bench press to engage the same muscles, primarily the pectorals, biceps, triceps, trapezius, deltoids, and latissimus dorsi muscles across the back. This is typically done with different hand positions or resistance types.