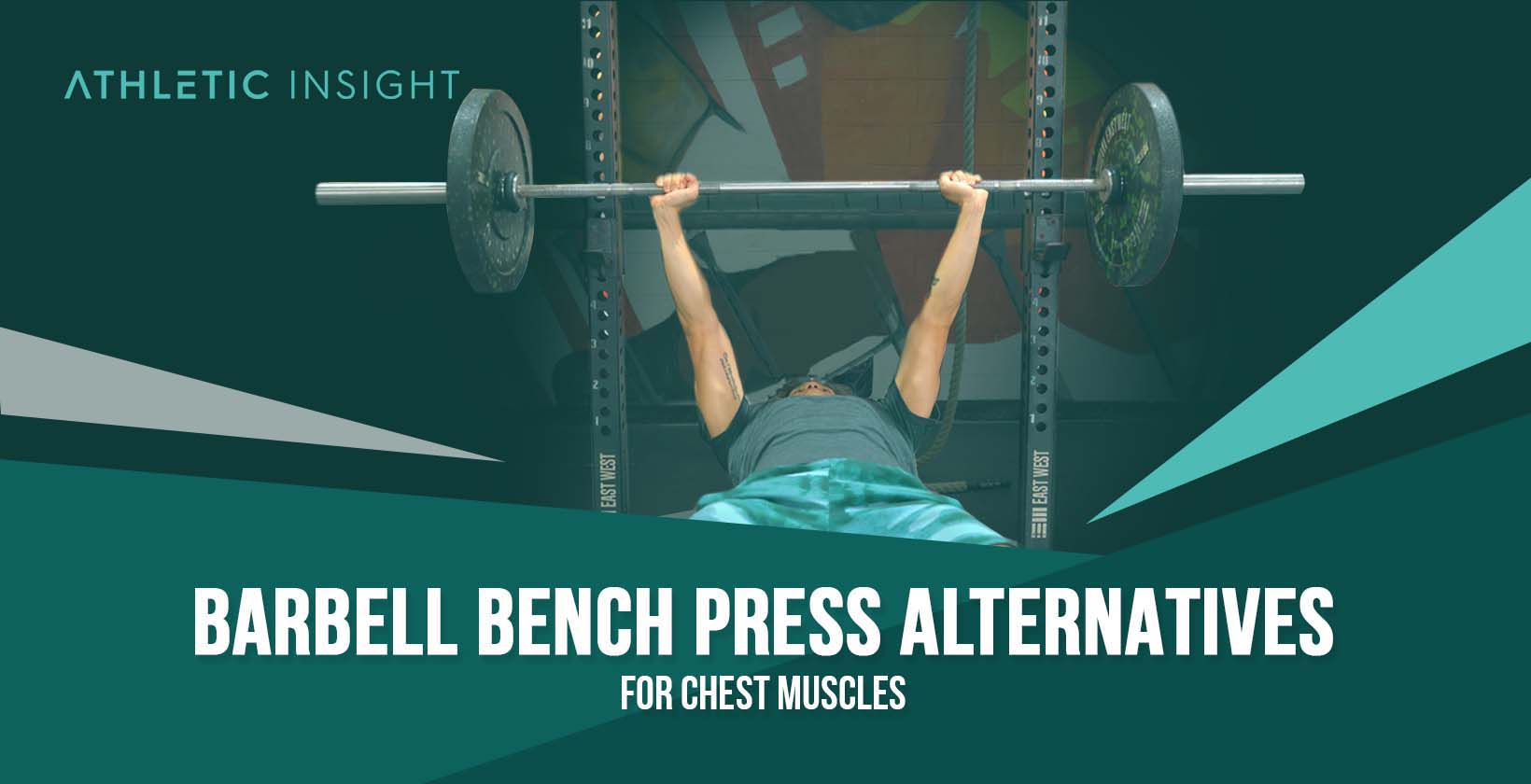 The barbell bench press is a compound exercise that taxes the pectoral and deltoid muscles. A barbell bench press exercise alternative is another movement that provides the same benefits while changing a few aspects slightly. Alternatives are necessary for comprehensive growth and total-body development without overtaxing certain muscles or movements.

Some beginner alternatives include the chest machine press to learn the perfect bench form. In contrast, more advanced users can try their luck at the barbell overhead press and barbell California press after mastering good bench press form.

Curious how to do a bench press? Users need to avoid certain errors and learn the best bench form.

While doing the barbell floor press, one common mistake is not starting the bar the right high and not bringing your elbows to touch the ground to go through a full range of motion. Two tips to help with the movement include breathing in during the eccentric portion, breathing out during the concentric portion, and using your elbows touching the ground as a cue to re-rack the bar.

The hardness level to perform in proper bench press form is a 5 out of 10, with the barbell bench press being harder and requiring more stabilization. It is helpful for pectoral muscles, shoulder muscles, and core muscles.

One common mistake while doing the dumbbell bench press is not lowering and raising simultaneously. Two tips to keep in mind are to go through a full range of motion and move your arms in synchronization to achieve good bench press form.

The degree of difficulty of this exercise is higher than the barbell bench press and the floor press. The main muscles worked include the chest, shoulders, and triceps. When learning how to bench press properly, users need to keep these tips in mind.

The dumbbell fly is a bench press exercise alternative that focuses on the pectoralis major, pectoralis minor, and anterior deltoids. This exercise is suitable for weightlifters and bodybuilders who want to build their chest muscles.

The alternatives to the dumbbell fly include a standing chest cable fly or a lying cable fly with a machine. Since the weights come outward from the body, the eccentric and concentric portion of the lift taxes the pectoralis muscles.

Two tips to keep in mind are to lower the weights evenly and bring the weights together to touch at the top of the motion. Users need to avoid keeping their arms completely straight or behind the elbows too much during the motion and to use a proper bench grip.

Push-ups are a bodyweight exercise bench press alternative that uses your bodyweight to tax the pectoralis major, core, quadriceps, shoulders, and triceps. This exercise is suitable and can be modified for anyone using the gym, including athletes, bodybuilders, and weightlifters.

The barbell overhead press is a proper bench press alternative that taxes the shoulders, pectorals, core, and lowers back and is suitable for athletes and Olympic lifters. Those interested in CrossFit and Olympic lifting will enjoy the overhead press, as it is conducive to the snatch, clean and jerk, and military press.

The barbell overhead press works the pectoralis major, pectoralis minor, deltoids, and abdominals. One common mistake doing this exercise is rounding the lower back. Individuals need to focus on keeping their core tight and pushing the bar straight overhead during the pushing motion.

The toughness level of the barbell overhead press is a 7 out of 10 since users will have to stabilize the bar, brace their core, and improve their shoulder mobility.

The dumbbell Arnold press works the triceps, trapezius, and deltoid muscles and is a bench press alternative suitable for beginners and bodybuilders. The Arnold press is unnecessary for younger children or athletes since it is mainly used for mirror muscles and works all shoulder angles.

The dumbbell Arnold press contains other alternatives, such as the overhead press, dumbbell front raise, and dumbbell lateral raise. One mistake that users may make during the Arnold press is lacking rotation. To avoid this mistake, users should keep two tips in mind — start with your palms facing your body and keep your feet hip-width apart. The toughness level of this exercise is a 6 out of 10 since it is more complicated than a typical overhead press or bicep curl.

One common mistake while doing the California press is to let your elbows flare out. Two tips to improve your form can be to keep your elbows locked in close to your body and lock your elbows out at the end of the press. The toughness level of this exercise is a 5 out of 10 since it has relative toughness to the barbell bench press.

Dips are a bench press exercise alternative that uses your body weight to stress the triceps brachii, pectoralis major, pectoralis minor, and abdominal muscles and can be used for athletes, beginners, and weightlifters. Since dips can be changed in terms of difficulty by moving your feet closer or farther away, they can be used for beginners and advanced users.

One common mistake while doing dips is not going through a full range of motion. Users can fix this problem by letting their elbows get to a 90-degree angle and keeping their chest upright during the movement. Alternative to dips includes weighted dips, standing tricep extensions, and standing cable overhead extensions.

One common mistake of the pullover is not to keep your arms and elbows at the right angle. The tips for this exercise include keeping a slight bend in the elbow and stopping the pullover directly over your chest line.

Alternatives to the cable crossover include the cable bench press, cable overhead press, dumbbell bench flyes, and dumbbell bench press. One common mistake that users may make with this exercise is letting the weights slam at the beginning and end of the range of motion. Two tips that users can keep in mind during this exercise are to keep a slight bend in the elbow and avoid arching your lower back.

The dumbbell fly is a bench press alternative that uses two weights to equally tax the pectoral muscles on the left and right side of your body, making this a compound movement that is suitable for athletes, bodybuilders, and weightlifters. The dumbbell fly alternatives that can improve this exercise include the cable fly, barbell bench press, and dumbbell shoulder press.

One common mistake that users may make during the cable press is not moving the cable simultaneously. Two tips that users can keep in mind during this exercise are to keep their chest upright and to end with your elbows at 90 degrees.

One common mistake that users may make during the hammer strength chest press is rotating the dumbbells incorrectly. Two tips that users can keep in mind during this exercise are to keep your palms facing internally during the entire range of motion and keep your elbows tight to your body.

One common mistake that users frequently make during this exercise is not bringing the barbell back down to the rack position at the chest. Two tips that users can keep in mind during the barbell overhead press exercise are to keep their elbows tight during the entire range of motion and to press the bar straight upward, not outward.

What are the main Bench Press Exercises Alternative Types?

Some alternatives may help single-arm strength, focus more on shoulder strength, or build the range of motion when compared to the bench press exercise. Individuals who do single-arm sports or need to balance their strength should focus on signal-arm exercises, such as single-arm dumbbell press or single-arm overhead press.

Those who need to focus on shoulder strength should incorporate overhead presses along with the bench press. Lastly, those who want to improve their range of motion should include push, pull, overhead, and bodyweight exercises into their routine.

Overall, the bench press is the min version of the preceding exercise that taxes the pectoralis, deltoids, and triceps. The advantages of the bench press are developing strength and power output in the upper body. The only disadvantage of this exercise is the imbalance of using one barbell vs. two dumbbells and the lack of safety for beginner users.

Which type of Barbell Bench Press Exercises Alternative is good for weightlifters?

Which type of Barbell Bench Press Exercises Alternative is good for athletes?

Which type of Barbell Bench Press Exercises Alternative is good for bodybuilders?

Bodybuilders need to focus on the smaller muscle groups that are oftentimes underdeveloped during compound movements. Bodybuilders should use the Arnold press, dumbbell fly, cable crossover, and decline dumbbell press to hit all sides of their pectoral muscles.

Which type of Barbell Bench Press Alternative is difficult to perform?

What are the Bench Press Variations?