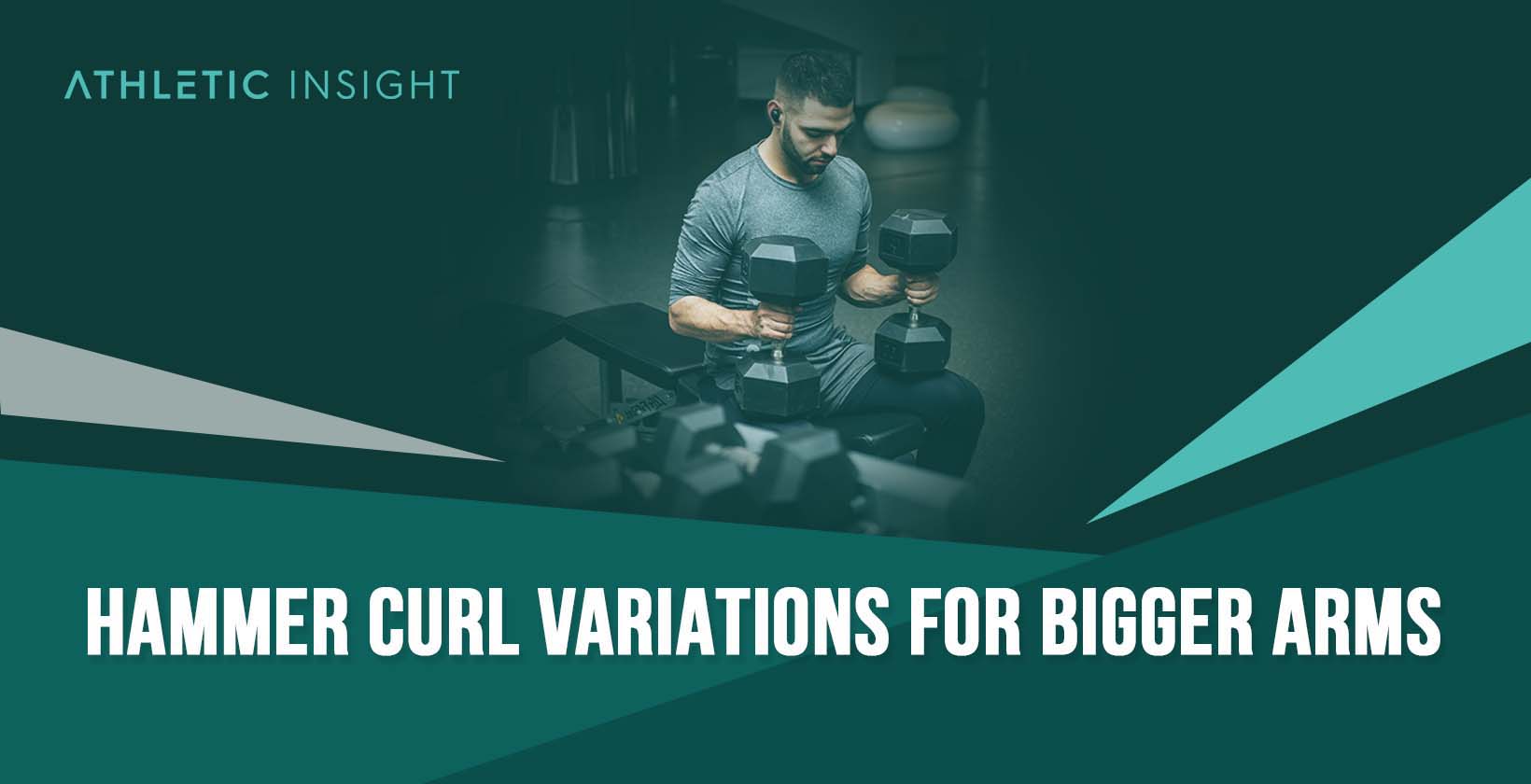 The hammer curl is a compound exercise that targets the biceps brachii and is a variation of the traditional bicep curl. This variation allows athletes to mix up workout routines while building strength and definition in the arms. Also known as the neutral grip biceps curl, all hammer curl variations focus on the upper and lower arms.

The hammer curl is a classic exercise that allows athletes to isolate the biceps for increased strength and definition. It’s common among bodybuilders and athletes seeking better bicep definitions.

These are the most common and best hammer curl variations.

The incline seated hammer curl is a hammer curl variation that focuses on the biceps muscles and forearms for bodybuilders and athletes. It’s ideal for increasing the biceps size while building endurance.

Since the incline seated hammer curl requires only a bench and dumbbells, it’s an accessible workout for male and female athletes. Incline seated dumbbell hammer curls variations are a good choice for beginners because the bench supports proper form. Additionally, experienced lifters can isolate targeted muscles to increase size and definition.

This variation focuses on the biceps brachii, one of the large muscles in the upper arms. It also engages the forearm muscles: the brachialis and brachioradialis. Further, the incline seated hammer curl builds hand, wrist, and elbow strength.

There are no variations of the incline hammer curl, other than those mentioned on this list.

Incline seated hammer curls focus on the arm muscles by engaging them throughout the exercise. It’s ideal for isolating the muscles and building endurance for other upper body exercises. While seated, athletes have a larger range of motion but can’t cheat because of the back support.

The most common mistake with this hammer curl variation is moving too fast through the reps so that the lifter doesn’t feel the tension in the muscles. To avoid this, keep the movements steady and be sure to move the elbows and upper arms in smooth, controlled motions.

Thanks to the back support from the incline bench, it’s not easy to make mistakes with this exercise. It’s a beginner-friendly workout.

Preacher hammer curls are a variation of hammer curls that focus on the biceps and brachioradialis muscles for strongmen, weightlifters, and bodybuilders.

Adult men and women can target specific muscles in the arms and maintain tension throughout the exercise to make gains in mass and strength in the biceps, brachialis, and brachioradialis muscles. It’s an excellent choice for lifters hoping to make gains in strength and definition because it gives the athlete complete control from beginning to end.

The main alternatives for preacher hammer curls involve swapping dumbbells for other equipment, like kettlebells or resistance bands. All variations focus on the same muscles but allow athletes to select the equipment they prefer or have access to.

Preacher hammer curls emphasize wrist and grip strength while allowing athletes to build tension in the forearms. It’s an excellent option for those athletes who need help with their deadlifts.

To maintain proper form for this variation, set the machine at the proper level so that it’s comfortable and doesn’t cause strain. Be sure to use slow, controlled motions to engage the muscles at each step.

Preacher hammer curls are viable for intermediate and advanced athletes who understand proper hammer curl form and have the requisite strength to do it properly.

The cross-body hammer curl is a hammer curl variation that focuses on the brachialis and biceps for athletes.

It’s ideal for male and female athletes seeking to tone and refine the arm muscles. Since it uses a cross-body motion, the alternating arms approach allows athletes to get a more balanced workout for the biceps and brachioradialis muscles.

The alternative is to attach a rope handle to two pulleys. The movement is the same and it works the same muscles, but some people prefer cable systems to free weights.

Cross-body hammer curls focus more on the biceps than the forearms because the upper arms do most of the work and remain engaged throughout the exercise. It’s ideal for people hoping to tone and strengthen the upper arms.

The most common mistake is relying on momentum to move the weights instead of working the arm muscles. Focus on slow, smooth motions to engage the muscles properly. Additionally, it helps to use lighter weights and more reps to focus on using proper form.

This variation is beginner-friendly, though intermediate and advanced lifters will appreciate the gains they can make.

The swinging hammer curl is a hammer curl variation that focuses on the upper back, arm, and ab muscles for bodybuilders, weightlifters, and strongmen.

This variation can benefit advanced lifters of both genders who want to work their posterior chain and activate more than just the arm muscles.

Some athletes don’t consider this variation a curl since the arms are not the primary focus, but the motion and equipment make it ideal for people hoping to work for more muscle groups at once. Swinging hammer curls work the abs, delts, and traps along with the brachialis muscles.

The most common mistake is not having enough strength to properly do the exercise. It’s not widely advertised or explained beyond lifting circles because it requires exceptional control of the muscle groups involved, primarily the abs and upper back. Athletes who cannot complete the exercise properly can break it down and work up to the swinging motion.

This variation is recommended only for advanced, skilled athletes.

Swiss bar hammer curls are a hammer curl variation that focuses on the biceps and forearm muscles for athletes and weightlifters.

Men and women hoping to increase weight will appreciate this variation. It still works the biceps and brachialis muscles like the other variations, but it is better for building strength.

Alternatives to the Swiss bar hammer curls involve using a wider or narrower grip, adding weight, and incorporating a squat. Each variation increases the complexity to challenge more advanced lifters.

The Swiss bar hammer curl works the brachialis, brachioradialis, and biceps muscles while increasing grip strength. It’s ideal for lifters seeking variety in their workouts and hoping to build strength.

The most common mistake is using too much weight. Lifters should use lighter weight and more reps to build strength and focus on proper form. Additionally, don’t attempt the variations until mastering the basic Swiss bar hammer curl.

This exercise is best for intermediate and advanced lifters.

The cable rope hammer curl is a hammer curl variation that focuses on the upper and lower arm muscles for bodybuilders and weightlifters.

Male and female athletes hoping to improve definition in their biceps will appreciate the cable rope hammer curl. It is extremely popular because the cable setup keeps constant tension in the biceps, brachialis, and brachioradialis muscles.

There are no cable-based alternatives to the cable rope hammer curl.

The cable rope hammer curl provides resistance for the arm muscles and supports slow, controlled motions. It’s ideal for athletes who need to vary their upper body routines, especially those who like working with cable machines.

The most common mistake is using too much weight to maintain proper form. Focus on lighter weight and use slow, controlled movements to feel the muscles engage.

This exercise is beginner-friendly.

Kettlebell Hammer curls are a hammer curl variation that focuses on the arm muscles for athletes.

Male and female lifters who enjoy working with kettlebells will appreciate this variation. It’s ideal for people hoping to strengthen their elbow flexors along with the brachialis, brachioradialis, and biceps.

There are no alternatives to the kettlebell hammer curls other than the variations listed above.

Kettlebell hammer curls use a kettlebell held in both hands. The motion engages the biceps, brachialis, and brachioradialis to move the kettlebell up and down. It also strengthens the elbow flexors, which can help build strength for other upper body exercises.

The most common mistake for this variation is using too much weight. Choose a lighter kettlebell and gradually increase reps to see the best results. Using proper form is more important than increasing weight.

This variation is good for beginners and intermediate lifters.

What To Know About Hammer Curl Variations

Facts about hammer curl alternatives are listed below.

The hammer curl focuses on the brachialis muscles and remains a popular option for bulking up the vanity muscles. However, alternatives force the arms to move in unique ways to create a more comprehensive workout for better definition and strengthening.

What Are the Common Mistakes In Doing the Hammer Curl Variations?

There are two primary mistakes for most hammer curl variations.

Which Type of Hammer Curl Variation is Beginner-Friendly?

Three of the hammer curl variations are beginner-friendly.

Though the traditional hammer curl is one of the best exercises for beginners, these variations provide support and allow new lifters to master the proper motions.

Which Type of Hammer Curl Variation is Good for Weightlifters?

These three variations challenge athletes to maintain proper form while allowing them to steadily increase weight and bulk up quickly.

What Are the Alternatives of Hammer Curl Exercises?

Aside from these variations, athletes might want to consider some hammer curl alternatives.