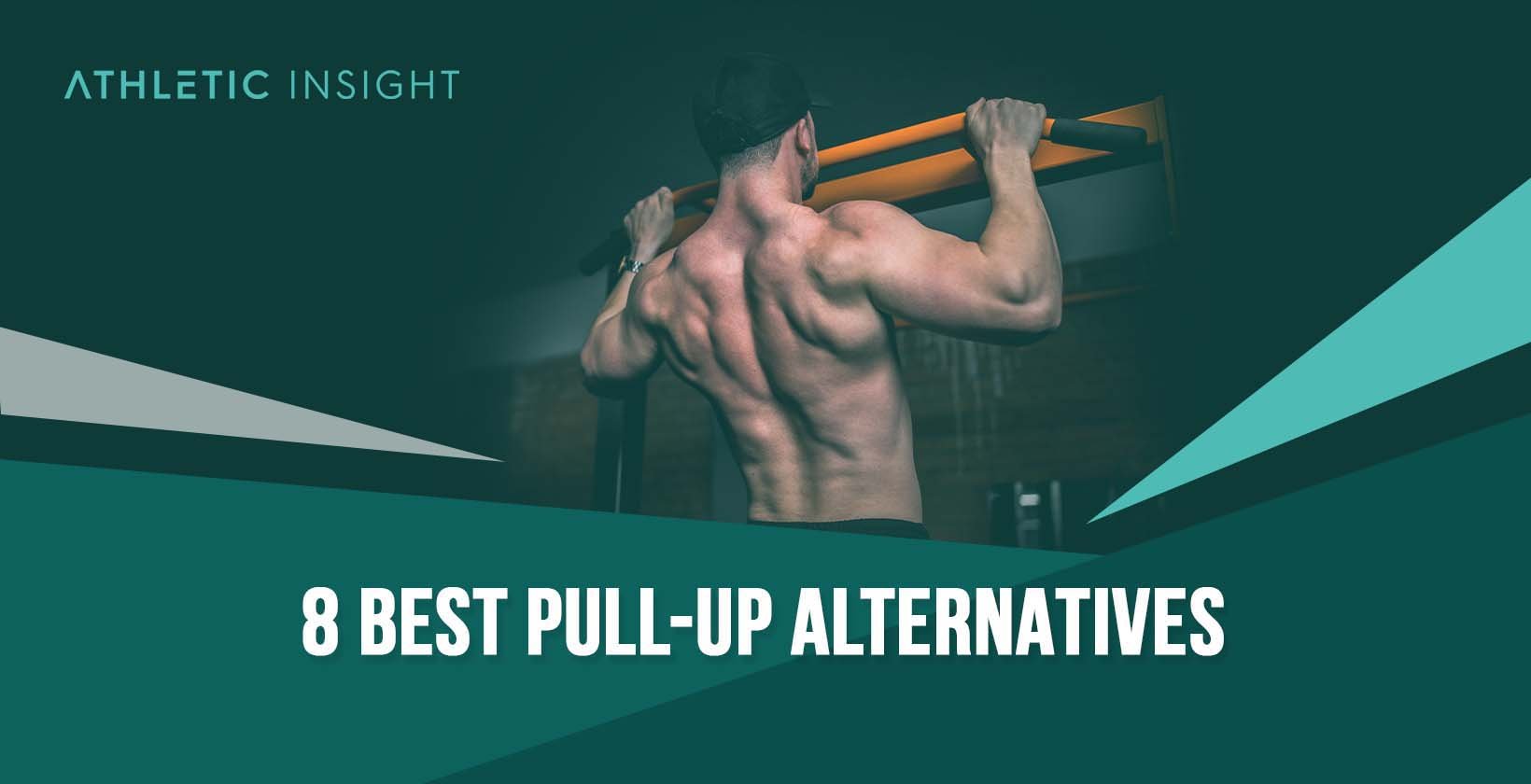 Pull-ups are closed chain upper body exercises that target the arms, shoulders, and upper back muscles. To perform a pull-up, reach above the head to a bar with palms facing away and pull up until your head rises above the bar.  A pull-up alternative works the arm and upper body muscles in a modified move that doesn’t require the exercise to lift their entire weight to do the exercise.

Most pull-up alternatives target the upper body muscles like the biceps, triceps, trapezius, rhomboid, abdomen, and latissimus dorsi muscles in the back. Beginners or people healing from injuries can do a pull-up alternative to get the same benefit as a regular pull-up. Pull-up alternatives can help beginners build upper body strength to be able to do a full pull-up. They can also help experienced and advanced lifters target specific muscles.

Standard pull-up exercises target the arms and upper body, but all the muscles benefit from the smooth and controlled movement. Therefore, keep the body straight and muscles tight while doing a pull-up. Pull-up alternatives require similar control to do correctly. Here are the 8 pull-up alternatives to consider.

Many pull-up alternatives for home are popular among home gym users and people who might not have a pull-up bar. In addition, many alternatives to pull-ups are more accessible to perform at home with minimal or readily available equipment than actual pull-ups. When exercisers perform a classic pull-up, they pull their entire weight up by the arms, bending the elbows as they go, with no jumping or momentum. Strongmen pull-ups often require weights to add to the weight they must pull up with their arms.

The inverted row is a pull-up alternative that focuses on building the rear deltoid, biceps, trapezius, and latissimus dorsi muscles for arm and upper back strength. The inverted row is good for beginner athletes who can’t yet perform pull-ups who want to build strength.

To perform the exercise correctly, keep your body in a straight line. Don’t let the hips drop or the muscles loosen as you pull yourself toward the bar. These lapses are common mistakes that keep people from getting the full benefit of the exercise.

The suspension trainer inverted row is a pull-up alternative that works more of the lower body muscles like the quadriceps, latissimus dorsi, and gluteus maximus. It also engages the posterior deltoid, biceps, and trapezius muscles. Bodybuilders and athletes who want to build full-body strength can benefit from this exercise.

The suspension trainer inverted row exercise is an intermediate exercise for someone who already has upper body strength and wants to build more. To perform this inverted row, hold straps and lean back until they’re in an incline position. Then, pull up, bending the elbows until your hands and chest are at the same level.

Common mistakes include letting the body sag or arching into the movement. Instead, hold the body rigid and keep the feet on the floor during the movement. The more inclined the body is, the more difficult the exercise.

The wide grip lat pull-down is a pull-up alternative that focuses on the latissimus dorsi muscles to strengthen the back. The lat pull-down also works the teres major and rhomboid muscles. The movement is good for athletes and bodybuilders who want to strengthen and tone the back muscles.

In addition to being a classic exercise, strongmen use this movement with heavy weights to build large muscles and increase their lifting capacity. The movement will make all upper body exercises easier and help beginners build strength to do a standard pull-up.

The exercise involves pulling a bar down to the chest while seated on a bench with knees under padded bars to keep the body from lifting into the movement.

This pull-up replacement is suitable for beginners who need to build muscle before performing pull-ups. When done with heavyweights, the exercise bulks the back muscles and helps with deadlifts and other back-heavy movements.

Bent-over rows are a substitute for pull-ups that works the latissimus dorsi, trapezius, rhombus, and deltoid muscles. Weightlifters use large weights to do this for bodybuilding, but the exercise is good for beginning athletes who want to build chest and back strength.

To perform a bent-over row, bend at the waist and grip the bar with an overhand position at about shoulder-width apart. Lift the bar by moving the back and shoulders to get into position. Upward pulls on the bar mimic the motion of doing a pull-up, merely in a different position.

Keep the back straight while performing the row and avoid the common mistakes of arching the back and moving the upper body during the row instead of only the arms. This pull-up variation is an easier pull-up alternative that’s great for beginners.

The lat push-down is a pull-up alternative that engages the trapezius, biceps, deltoids, pectoralis major and minor, and the latissimus dorsi muscles. The exercise is suitable for beginning athletes, strongmen, and bodybuilders, though beginners need to focus on form and smooth movement while strongmen and bodybuilders concentrate on weight.

To perform the exercise, stand in front of a cable and pulley machine, bend at the waist with knees slightly bent, and push the bar down to your thighs. Then, lift the bar slowly to shoulder height before pushing down again. Don’t lean into the movement, but keep the body in the same position while only moving the arms to do the exercise correctly.

The single-arm lat pull-down is a pull-up alternative that focuses on the bicep, deltoid, and trapezius muscles. The movement builds strength for doing pull-ups and is suitable for beginning athletes and bodybuilders to tone and strengthen the arm and upper body muscles.

The pulldown is an isolating, single-joint seated exercise. To perform the movement, grip the cable above you with one hand at a time, with an underhand grip so that when you pull it down to shoulder height, your palm faces yourself. Be careful to hook your knees under the padded bar to avoid moving your body and losing some of the muscle-focusing benefits of the exercise.

The close grip V bar pulldown is a pull-up alternative that focuses on the latissimus dorsi muscles and also engages the biceps, deltoids, trapezius, and pectoralis major and minor. This exercise is suitable for athletes who want to build strength in the upper body muscles. Bodybuilders and strongmen can use more weight for bigger muscle-building.

By pulling the bar down closer to the body than in a wide grip lat pull-down, the intensity focuses on the lat muscles. Common mistakes are leaning back during the pull or holding the bar too far away. Instead, it’s important to keep the body still and pull as straight down as possible.

The dumbbell pullover is a replacement for a pull-up that targets the latissimus dorsi, pectorals, triceps, and ribcage serratus muscles. Athletes and bodybuilders use this exercise to build upper body strength and definition.

To perform the movement, lie on a bench and hold a dumbbell above your chest with straight arms. Your hands should be beneath the upper plate. Lower the arms behind the head until they’re in a direct line with the body. Then, lift the weight back into position above the chest. It’s important to keep the arms extended during the exercise.

Common mistakes in the form of dumbbell pullover include soft arms and not arcing the weight in a straight line but moving to one side. To engage the core muscles, abdominals, thighs, calves, and hamstrings, athletes can do a variation where they move perpendicular to the bench and rest their upper back on it.

Those doing the exercise must keep the torso flat with their knees bent and feet on the floor as if they’re shaped like a table while performing the same exercise.

What to Know About Pull-Up Alternatives?

Facts about pull-up alternatives are listed below.

A substitute exercise for pull-ups can make it easier for beginners to focus on form and building strength than a standard pull-up, especially if they can’t do the movement yet. More experienced lifters can use pull-up alternatives for more focused muscle-building and strength training.

Which Pull-Up Alternative Is Beginner Friendlier?

One of the best exercises for beginners is the dumbbell pullover pull-up replacement. This movement doesn’t use your entire body weight, so there’s no risk of falling mid-movement when trying to pull up to a bar.

Dumbbells are lifted overhead in a full-arm movement to build strength in the shoulder and trapezius muscles.

Which Pull-Up Alternative Is Better for Back?

The wide grip lat pull-down is one of the best back exercises and a back-building pull-up alternative. The focused targeting of the back muscles and the safe seated position mean that even beginners can learn to perform the movement properly to get the most benefit.

Which Pull-Up Replacement Exercise Is Better for Arms?

The inverted row pull-up alternative is one of the best arms exercises that focuses on the same muscles as a standard pull-up. People doing it perform the movement from a horizontal position instead of a vertical one, but it uses the same muscle groups.

Which Pull-Up Substitute Is Better for Strength?

The suspension trainer inverted row is one of the better pull-up replacement exercises for strength. The movement does require pulling and lifting the full body weight, so it builds strength in the arms, shoulders, and back. Those doing it can adjust the incline of their body to make it less or more difficult.

When Should an Athlete Use Pull-Up Alternative for Exercise?

An athlete can use an alternative pull-up exercise to focus on the muscles that need the most development. Pull-up variations like the lat pull-down and dumbbell pullover done with the appropriate amount of weight and repetition for an athlete’s goals can help build strength and improve lifting ability.

What Are the Advantages of Modifying Pull-Up?

Modifying a pull-up allows the same movements and muscles to engage even if someone can’t do a complete standing pull-up yet. The modification lets them learn to do pull-ups and gain strength and confidence by successfully performing the modified exercise.

Can Pull-Up Alternatives Replace the Pull-Up?

Yes, pull-up alternatives can replace the pull-up as long as people perform a variety of replacement exercises for pull-ups to ensure that all the muscle groups pull-ups target get worked out.

Each alternative shifts the intensity of muscle engagement slightly, so doing several pull-up alternatives ensures that exercisers get the same benefit as doing pull-ups.

What Are the Pull-Up Variations?

There are dozens of pull-up variations and pull-up replacements that engage the same muscles as the pull-up. Almost any pull-up alternative can be done with extra weight, in a modified kneeling or prone position, or with added weight for muscle building.

Some alternatives and variations like the trap bar pull-up are close to a conventional pull-up, while others like the lat bar pull-down and dumbbell pullovers don’t require lifting the bodyweight up but target the muscles needed to perform the exercise.